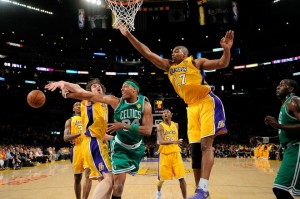 Pau Gasol (left) and Andrew Bynum (right) helped limit Paul Pierce (middle) and the Celtics to 1-for-10 shooting from behind the 3-point arc in Game 1. (NBAE/GETTY IMAGES)

They stopped dribble penetration. They protected the paint. They rebounded the heck out of the ball. They took charges. They put a hand in the face of every shooter. They got to loose balls. And they took away the other team’s air space and made it a very uncomfortable night.

If you think I’m referring to the Boston Celtics you are dead wrong. As it turned out, the L.A. Lakers were more physical, more disruptive, more determined and more active than the Celtics in Game 1 of the 2010 NBA Finals. These were definitely not your 2008 L.A. Lakers. In fact, these are not even your 2009 L.A. Lakers. They’re better.

The Lakers simply looked far superior than the Celtics in their 102-89 victory on Thursday night to take a commanding 1-0 lead in the best-of-seven series.

Commanding? Yes. Commanding. Why? Phil Jackson is 47-0 when he wins Game 1 of a series. That’s why.

If the Lakers can sustain their defensive pressure for the rest of this series, it is going to be extremely hard on the Celtics to score points.

Paul Pierce scored 24 points but it wasn’t an easy 24 as he struggled against Ron Artest’s vice grip D. Kevin Garnett and Kendrick Perkins looked overmatched against Pau Gasol and Andrew Bynum, as the Lakers’ big men dominated the Celtics on the boards. And Rajon Rondo couldn’t push the tempo fast enough to get easy layups and was stuffed a few times when he did try to get to the rim. Defense, defense, defense. That was the theme of Game 1, but it was the Lakers who displayed more intensity and tenacity – two things the Celtics are known for and two reasons why they beat the Lakers in the ’08 Finals.

“The Lakers were clearly the more physical team today,” said Celtics coach Doc Rivers. “I thought they were more aggressive. They attacked us the entire night and we didn’t handle it very well. I’ve always thought that the team that is the most aggressive get better calls. That’s just human nature.”

The Lakers claimed they learned their lesson from ’08, and they certainly showed it by playing hardball with the Celtics.

L.A. outrebounded Boston, 42-31, and completely took the Celtics apart on the offensive boards with a 16-0 edge in second-chance points. The Lakers were a plus-18 in points in the paint, a domination rarely seen done against a Celtic team that pride themselves in keeping teams away from the paint.

“I’m mean, they were,” Pierce said of the Lakers’ newfound toughness. “Look at the rebounding advantage, the blocks, and you look at the stuff that don’t even show in the box score if you watched the game. All the hustle plays. That’s all part of physicality.”

There must be an echo in the room because Ray Allen pretty much said the same thing. “We have to do a better job of keeping our paint tight,” Allen noted. “When they moved the ball, we didn’t suck in and close the gaps when they penetrated. We made them miss, but they got second chance opportunities.”

Artest set the table for the game when he scored a two-point takedown on Pierce 27 seconds into the game. It not only established a physical tone but it sent a message to the Pierce and the Celtics that the Lakers were ready to rumble.

“I expected it to be physical. He’s going to work as hard and he’s their defensive leader. I don’t know what else you want me to say. What are you looking for? I mean, he’s a good defender,” Pierce said of Artest, who was not part of the Lakers team that fell to Boston two years ago, along with Andrew Bynum.

The Lakers also held the Celtics to 43% shooting from the field and limited them to 1-for-10 from behind the arc. The Lakers took a nine-point lead at halftime and increased it to as many as 20 in the fourth quarter.

Though Bryant led all scorers with 30 points, it was Gasol who really did the most damage on the Celtics. The 7-foot Spaniard with the wingspan of a jumbo jet made eight of 14 shots, all from close range, scored 23 points and ripped down 14 rebounds. He was officially credited with three blocked shots, but it seemed like he altered 10 shots near the basket with his length.

“I knew it was gonna be physical,” said Gasol. “This being our third consecutive final, we understand the nature of the game, we understand who our rival is, and you gotta compete and match that aspect of the game in order to be successful.”

Because the Celtics had no answer for Gasol and Bryant, the game became so one-sided that Lakers fans began chanting for “We want tacos!” midway through the fourth. If you haven’t been to Staples Center in L.A., whenever the Lakers hold the opposition to under 100 points, everyone in the building gets free tacos courtesy of Jack In The Box.

By the way, I find it really hilarious that Laker fans who paid somewhere in excess of $500-$1,000 for playoff tickets are craving for $3 tacos. I’m pretty sure everyone in the arena can afford to buy all the tacos they want.