Ron Artest was at the TD Garden when the Boston Celtics crushed the L.A. Lakers in Game 6 of the 2008 NBA Finals. He went to the Lakers locker room to seek out Kobe Bryant, following the Lakers’ star all the way to the showers.

Artest told Bryant, and anyone else who would listen, that he can help the Lakers win a title and would love to wear the purple and gold. Two years later, Artest will have an opportunity to fulfill his promise.

“This is his chance to shine,” said Lakers coach Phil Jackson, who told reporters on Wednesday that he plans to stick Artest on Boston’s Paul Pierce. “We had a tough matchup with Pierce last time we played them in the playoffs. [Artest] is a guy who we know can defend, so we anticipate this as a matchup of interest.” 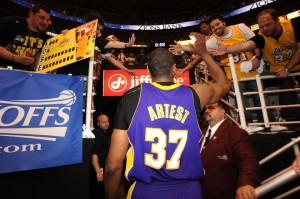 Ron Artest will be matched up against Paul Pierce in the 2010 NBA Finals. (NBAE/GETTY IMAGES)

Artest is one of two Lakers starters who did not play in the ’08 Finals, the other being center Andrew Bynum. The Lakers signed the eccentric but gifted forward with the idea that he’ll be the physical defensive stopper that L.A. severely lacked against physical small forwards such as Carmelo Anthony, LeBron James and Pierce.

The Lakers never had to face Anthony or James in the playoffs, but they are facing Pierce, the 2008 NBA Finals MVP and a player who makes the Celtics a more dynamic team with his ability to create his own shot and get to the free throw line. He averaged 21 points in the ’08 Finals and has a career 25-point average against the Lakers.

However, in two games against the Lakers during this past regular season and primarily guarded by Artest, Pierce was held to 13 points and shot just 40% from the field.

“Pierce is a tough matchup. He’s very smart, he’s one of the few players that has a long ball, has mid-range game, can get to the basket so, I think, that makes him a tougher cover than most. But Ron’s up for the challenge,” said Kobe Bryant, who also believes the presence of Bynum, despite his ailing knee, will be a factor in the series.

“It helps having him against this Celtics team. They’re a big team, a physical team. I’m excited for him. This is a big challenge for him,” Bryant said of his 7-foot, 280-pound starting center, who averaged 16 points and 10 rebounds in two games against Boston during the regular season.

Bynum and Artest are two defensive layers that discourages Pierce from driving to the basket, making him a one-dimensional player. If Pierce puts up similar numbers in The Finals, the Celtics are going to lose the series because they are not good enough offensively to make up for Pierce’s scoring.

Artest will use his 260-pound frame to uproot Pierce out of his sweet spots. He’ll make him work extra hard for his points and not allow him to camp out on the free throw line where he has made his living for the past 12 years.

“It’s not going to change my mentality. I’m gonna approach the game the way I approach a lot of these games,” Pierce claimed. “Just a scorer’s mentality, being real aggressive. Obviously, I’m playing against one of the top defenders in the game. So, he’s going to make things a little bit more harder, a little bit more physical. You gotta expect that. I mean that’s what Ron Artest is – a guy who tries to get in your head throughout the game, grab on you, pull on you, scratch on you. You gotta expect those things. When I go to a game, playing against him, I expect all those things.”

Though Pierce knows what to expect from Artest, the matchup will still be extremely difficult for him – similar to what transpired in the Cleveland series in which Pierce had to wrestle with LeBron – and the Celtics will need to find their offense somewhere else. But where? Bryant will blanket Rajon Rondo and Pau Gasol should be able to handle Kevin Garnett. The only real matchup advantage for the Celtics is Ray Allen against the smaller Derek Fisher. But at this stage of his career, Allen can’t be counted on to score 30 points every single night.

There is a strong perception around the league that the Lakers are soft team and the way to throw them off their game is push them around. But that was two years ago. The Lakers are no longer pushovers and Artest provides them with an edge, a type of bulldog-type player who embraces ruggedness and doesn’t back down from a challenge.

“Ron is unique. He’s very much an individual,” Jackson said. “As the NBA goes, every player has his own individual personality you have to handle in a different way. Ron is determined, I think he’s dogged and that’s what makes him a great defensive player.”

The Celtics are not the only team in this series who can play in-your-face defense. The Lakers can play that too. Boston’s defense pitted against L.A.’s offense is a stalemate. But L.A.’s defense is much, much better than Boston’s offense. Ultimately, that is the difference in the series.