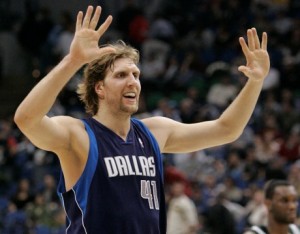 According to reports, Dirk Nowitzki will remain with the Mavericks.

For those keeping score, it’s 4-1 in favor of teams retaining their own free agents.

As of July 5, four big-time free agents have have decided to stay with their old teams: Dirk Nowitzki, Paul Pierce, Rudy Gay and Joe Johnson.

The only free agent who has officially signed with another team is Amare Stoudemire. Yahoo! Sports and TNT’s David Aldridge have reported that Stoudemire has accepted the Knicks’ contract offer worth $100 million spread across five years. Stoudemire will be reunited with coach Mike D’Antoni, who coached him in Phoenix.

Yahoo! Sports also reported that Johnson will re-sign with the Atlanta Hawks, a six-year maximum deal that is close to $120 million.

Nowitzki recently accepted a four-year deal worth somewhere in the neighborhood of $80 million to remain with the Dallas Mavericks and Pierce agreed to a four-year, $60-million deal to stay in Boston. Gay was the first big-name free agent to agree to terms, as he reportedly received a five-year, $80-million contract from the Memphis Grizzlies last Thursday when the free-agency period officially got underway.

The return of head coach Doc Rivers certainly persuaded Pierce to stay put, and the Celtics are also in negotiations with shooting guard Ray Allen, who has also expressed his desire to stay in Boston. This means that the Celtics’ vaunted starting five are all expected to be back next season to make another run at a title (barring center Kendrick Perkins fully recovers from knee surgery).

What was supposed to be the summer of massive exodus has turned into an offseason of status quo. Of course, things could change in a heartbeat especially if that someone – ahem! LeBron James – decides to spurn his hometown team and play elsewhere next season.

But, that hasn’t happened yet and it’s not expected to happen until the end of the week, according to several reports. James is mulling over offers presented to him by NBA teams with a ton of salary cap room: New Jersey, New York, Miami, the L.A. Clippers, Chicago and Cleveland.

Wade met with the Bulls twice and has told people close to the situation that he is seriously considering playing for his hometown team. The Heat have already told Wade that they are prepared to give him the max deal and have promised him a roster upgrade.

Others who are noncommittal are Dwyane Wade, Chris Bosh and Amare Stoudemire, although Stoudemire recently was offered the maximum contract of five years, $100 million by the Knicks. Stoudemire is reportedly meeting with Knicks head coach Mike D’Antoni, his old coach in Phoenix, on Monday to hash out some past issues.

The Suns have reportedly re-signed forward Channing Frye and also acquired forward Hakim Warrick, so it is highly unlikely that Phoenix will bring back Stoudemire, who has played his entire career with the Suns.

Joe Johnson has a standing six-year max offer from the Atlanta Hawks, a deal that could be worth $120 million. Johnson remains mum about his situation, obviously waiting for LeBron and D-Wade to make their moves. Johnson has also drawn interest from the Knicks, as D’Antoni prepares to go to Plan B in case LeBron signs with Chicago or Cleveland – which is more and more apparent.

ESPN’s J.A. Adande wrote that the Toronto Raptors have not been enamored with the way Bosh has been publicly “enjoying himself” too much and using his Twitter account to tell his followers on his status. Bosh is asking for a max contract, but he can only get it if the Raptors agree to a sign-and-trade deal.

At the end of this long, drawn-out process, money will prevail. Players are taking advantage of the current labor deal because they are anticipating that the new collective bargaining agreement won’t be as player friendly.