As the clocks in NBA cities struck midnight on July 1 signifying the beginning of the free-agent signing period, the much anticipated flurry of exodus was tempered a bit with reports that more than half of the free-agent class of 2010 appear to be sticking with their old teams.

Doc Rivers’ decision to return to the Boston bench and coach the Celtics for the 2010-11 season could cause a chain reaction – in a very good way. With Rivers back as coach free agents Paul Pierce and Ray Allen are likely to stay in Boston, keeping the core group that has reached the NBA Finals twice in the last three seasons.

So, who else is staying?

Dwyane Wade has publicly stated that he prefers to stay in Miami as long as the Heat upgrades their roster, and it appears that Pat Riley has lined up an impressive list of All-Stars to pair up with Wade in South Beach, beginning with Chris Bosh and Amare Stoudemire.

Dirk Nowitzki opted out of his original deal, but this doesn’t mean he’s leaving Dallas. Sources say that Mavs GM Donnie Nelson is expected to meet with Nowitzki soon to begin negotiations on a new deal that would keep Nowitzki a Maverick for the rest of his career.

The Memphis Commercial Appeal is reporting that Rudy Gay has verbally agreed to a contract extension Thursday that would keep him in Memphis for the next five years.

Cavalier fans have been campaigning hard to keep Ohio’s favorite son, LeBron James, in Cleveland while other suitors such as the Bulls, Knicks and Nets keep tugging at The King’s robe in an attempt to lure him to their big cities.

Tracking the status of the top NBA free agents this summer (updates through July 1):

LeBron James
The biggest catch of the free-agent market met with New Jersey Nets billionaire owner Mikhail Prokhorov and his buddy Jay-Z Thursday morning. The Knicks followed with their pitch to convince LeBron to move his empire to Manhattan. The Clippers and Heat are on deck for Friday, and the Bulls the Cavaliers have their appointments on Saturday. LeBron appears to be following through with his original plan of keeping his options open and hear what other teams have to offer. James says he’ll make his decision by July 5.

Chris Bosh
It appears the South Beach Summit was more for show than anything else. Bosh has told reporters that he doesn’t see himself and LeBron joining Dwyane Wade in Miami. Bosh says he wants to be “the guy” on his next team, and he seems a little insulted that he was being portrayed as the bottom end of a James-Wade-Bosh superstar triangle. However, it doesn’t mean Bosh can’t play with Wade in Miami. Other teams in the running are Chicago, Dallas, Houston, New Jersey and New York. 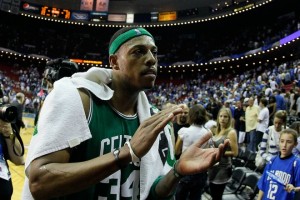 Paul Pierce
Pierce went through with his opt-out clause last night, but this could be just a formality for the Celtics captain and the ballclub. Pierce and the Celtics, the only team Pierce has played for in his entire NBA career, seem headed to the negotiating table and begin reworking a new deal that would keep Pierce in a Celtic uniform for a while, according to the Boston Herald. Pierce, who will be 33 next season, is looking for a long-term deal.

Ray Allen
Allen could get offers from other clubs and there’s still a slight possibility that he could play elsewhere next season. But the return of Rivers and Pierce, and a little more money love from the Celtics, should persuade Allen to come back to Boston.

Joe Johnson
The Hawks made their final pitch on Thursday to their All-Star guard to the tune of a six-year, $120-million contract. There are several reports that Miami Heat President Pat Riley will meet with Johnson, who is also expected to visit New York and possibly reunite with Mike D’Antoni, Johnson’s former coach with the Phoenix Suns. A week ago, Johnson was likely headed out of Atlanta, but this latest offer by the Hawks is too good to pass up. Money talks around the league, and the Hawks made it loud and clear that they are willing to overpay to keep Johnson in the ATL. It’s an offer Johnson can’t refuse.

Amare Stoudemire
According to ESPN’s Ric Bucher, the Suns tried to strike a last-minute deal with Amare prior to the beginning of the free agency period but both sides couldn’t agree on a contract. So now, Stoudemire is officially on the market and appears to be headed elsewhere. Mike D’Antoni would love to bring Stoudemire to New York and pair him with Joe Johnson to create Phoenix Suns East on Broadway. Stoudemire wants a maximum contract, but the only way he gets his max deal is if the Suns do a sign-and-trade. The Houston Rockets reportedly offered Shane Battier and Luis Scola to the Suns for Stoudemire.

Dirk Nowitzki
All signs point to Nowitzki re-signing with the Mavericks, the team that Dirk has played for his entire NBA career. Mavs GM Donnie Nelson is reported to meet with Nowitzki sometime Thursday to not only begin negotiations on a new deal but to also talk about how to lure other free agents to Dallas. Nelson says there is no backup plan if the Mavs don’t re-sign the 2006-07 MVP.

Rudy Gay
Yahoo! Sports has confirmed what the Memphis Commercial Appeal first reported that Gay is staying with the Grizzlies. Adrian Wojnarowski wrote that Gay has agreed to a five-year, $81.6-million contract, with the fifth and final year of the contract will be Gay’s option.