As soon as LeBron James made his infamous “I’m taking my talents to South Beach” statement back in the summer, expectations were so high in Miami that anything less than spectacular is considered a failure.

By his standards, LeBron is not enjoying a most valuable season. But pitted against the rest of the league LeBron’s numbers for the first 40 or so games as a member of the Miami Heat have been rock solid. However, is it good enough to be considered the MVP of the first half of the season?

OneManFastBreak.net Editor and Publisher Joel Huerto picks the MVP, rookie of the year, sixth man, and coach of the year at the halfway point (sort of, more like the All-Star break point) of the 2010-11 NBA season. 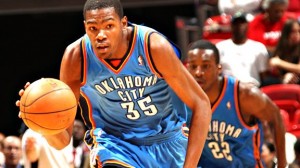 Most Valuable Player
Kevin Durant, Oklahoma City Thunder
The MVP award should come down to LeBron James, Kobe Bryant, Derrick Rose, Dwyane Wade and Dwight Howard. James and Wade cancel each other out, Bryant has slowed up a tad, Howard has turned into Rasheed Wallace with his temper tantrums and Amare Stoudemire’s Knicks have fallen on hard times after a quick start. So, that leaves us with Rose and Durant, and in my book, Durant gets the slight nod because he has met or even exceeded expectations while Rose was a late addition to the MVP debate. Durant, the league’s leading scorer at 29 points per game (three points better than LeBron and Amare) is a lock to make the All-NBA first team while Rose may get bumped by Wade and Kobe. And if the Thunder had a better record, Durant would be a cinch to win MVP and we wouldn’t be having this debate.

Rookie of the Year
Blake Griffin, Los Angeles Clippers
The Clippers young gun has turned into the 2.0 version of The Human Highlight Film and his spectacular slams have become a regular on SportsCenter. At the start of the season, John Wall and Griffin were neck-and-neck in terms of rookie hype. Since Wall has been hampered by all sorts of nagging injuries, Griffin has soared over the Wizards star and has turned the ROY race into a one-horse competition. If would be a monumental upset if Griffin, who recently was named to the Western Conference All-Star team, didn’t win the NBA Slam Dunk contest during All-Star Weekend, and he should win ROY hands down.

Sixth Man of the Year
Glen “Big Baby” Davis, Boston Celtics
When Davis was drafted out of LSU, his game was very limited. He relied on his girth and power and couldn’t his a 15-footer even if a box of Snickers were tied to the end of the basket. Now, Davis has shed the baby fat (or at least some of it) and has developed a reliable mid-range jump shot to go with his bully move to the basket. His numbers won’t WOW you (11 points and 5 rebounds), but his value sometimes doesn’t show up on the box score. Without Davis’ contributions, the Celtics wouldn’t have the best record in the East. That’s how much Big Baby has grown up.

Coach of the Year
Gregg Popovich, San Antonio Spurs
Altering a team’s image in one season is nearly impossible, but Coach Pop was able to pull off this minor miracle. After his Spurs were knocked out in the conference semifinals, Popovich knew the Spurs needed more scoring so he revamped the team’s philosophy on offense. The methodical, walk-it-up approach has been replaced by a more free-wheeling offense to highlight the great one-on-one abilities of Tony Parker and Manu Ginobili. Pop also managed to convince Richard Jefferson that he can make 3-points, especially from the corner, which has given San Antonio another outside shooter and unclog the lane for Parker, Ginobili and Tim Duncan. The major makeover is a key reason why the Spurs own the league’s best record.