At the halfway point of the lockout-shortened, 66-game NBA season, two teams have emerged from the pack and two players have risen to the top: the Miami Heat led by LeBron James, and the Oklahoma City Thunder led by Kevin Durant.

If the Heat and the Thunder maintain their incredible pace, the MVP award could very well come down to LeBron and KD. OneManFastBreak.net picks the most valuable player, defensive player of the year, rookie of the year, most improved, sixth man of the year, and coach of the year.

MOST VALUABLE PLAYER: LEBRON JAMES
While it wouldn’t be wrong to vote for Kobe Bryant (who is leading the league in scoring), Chris Paul (who has the L.A. Clippers in first place in the Pacific Division), and Durant for MVP, it is hard to ignore the fact that James is enjoying one of the best seasons of his career, a career that already includes two MVP seasons. LeBron is at his usual studly averages in points (27), rebounds (8) and assists (6), but a big addition to his arsenal this season is the post-up game. James has been much more efficient from the field, making 55% of his shots, the best in his career. On the other hand, he is on pace to attempt just 120 threes, the lowest in his career. 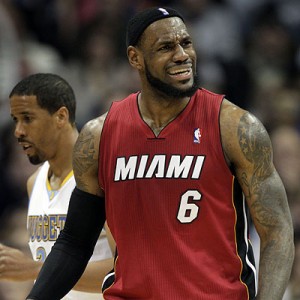 DEFENSIVE PLAYER OF THE YEAR: SERGE IBAKA
Could this be the year Dwight Howard’s three-year dominance as DPOTY comes to an end? Howard remains a stud on defense, leading the league in rebounds (15) and fifth in blocked shots (2), but Serge Ibaka has been an absolute beast. Air Congo leads NBA in blocks (3.2), which is a huge reason why the Thunder is in the top five in field-goal percentage defense. Ibaka, or Iblocka, has reached double-digit blocks three times this season. He had 10 against the Mavericks on Feb. 1, 10 against the Kings on Feb. 9, and a season’s best 11 against the Nuggets on Feb. 19. He is on pace to rack up more than 200 blocks, and deny Howard his fourth DPOTY trophy.

ROOKIE OF THE YEAR: RICKY RUBIO
The 2011-12 season has been the year of the young point guards and two players have emerged from the pack for top rookie honors: Kyrie Irving of the Cavaliers and Ricky Rubio of the Timberwolves. Rubio brought with him tons of hype, but he has exceeded expectations with a spectacular first half. The Spanish playmaker is fifth in the league in assists (8.4) and second in steals (2.4). The only other guard who is in the top-five in both categories is Chris Paul. Irving, the top pick in the 2011 draft, leads all rookies in points (18) but he has injected some life into the moribund Cavaliers, which is still reeling from the whole LeBron Decision two seasons ago. Rubio’s Timberwolves are in a playoff hunt in the West, while Irving’s Cavs remains a lottery team. If the Timberwolves earn a playoff berth, it would be hard to ignore Rubio as the choice for ROY.

MOST IMPROVED:  JEREMY LIN
If someone else wins this award aside from Jeremy Lin then voters need to have their heads examined. Lin has been an overnight sensation, lifting the Knicks out of hibernation and creating a Tebow-esque buzz around the league. Lin’s phenomenal rags-to-riches rise has been the story of the NBA season. And he has backed up his Disney-like tale off the court with historical numbers on the court. His 38-point performance against the Lakers on Feb. 10 and his game-winning 3-pointer against the Raptors on Valentine’s Day nearly shut down Twitter. Last season, Lin was novelty act basically hanging on by his shoe laces to stay in the NBA. This season, he is the toast of Broadway and a worldwide star.  Not bad for a guy who went undrafted in 2010, cut twice, and running in the D-League a month ago. As Knicks superfan Spike Lee would say, “you can’t script this any better.” 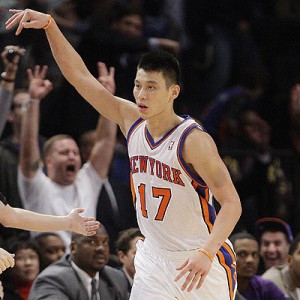 Jeremy Lin should be the runaway winner of the NBA's most improved player award. (ASSOCIATED PRESS)

SIXTH MAN OF THE YEAR: JAMES HARDEN
The race for the best bench player in the league comes down to three players: Jason Terry of the Mavericks, Lou Williams of the 76ers, and James Harden of the Thunder. Terry, who won the award in 2009, is a big reason why Dallas has been able to stay afloat in the West while Dirk Nowitzki regains his fitness. Williams is enjoying his best season with Philly, leading the team in points (15.7) and often called upon to take (and make) the game-winning shots. But as good as Terry and Williams have been this season, Harden has been better. The former Arizona State star is the only non-starter in the top 30 scoring list, and his improved 3-point shot has made his lefty dribble drive even more devastating. He may not have Russell Westbrook’s blazing speed nor Kevin Durant’s pin-point shooting, but he is extremely crafty and can get his own shot. It’s time for the basketball world to recognize Harden as one of the best bench players in the league.

COACH OF THE YEAR: ERIK SPOELSTRA
Scott Brooks is a worthy candidate for coach of the year, as well as Doug Collins for the job he has done in Philadelphia and Tom Thibodeau for keeping the Bulls running while Derrick Rose heals from his injuries. However, none of them came in with the immense expectations like Erik Spoelstra did in Miami, and all the Pat Riley protoge has done is lead the Heat to the best record in the East, fend off the naysayers, exceed writers’ expectations, and find a way to keep LeBron, Dwyane Wade and Chris Bosh happy without completely dismissing the rest of the team. Spoelstra has done a masterful job of being part teacher, part taskmaster, part ego manager, and part motivator. He opened up the playbook offensively to allow LeBron and Wade to get in the open court, but he still maintained the Heat’s defensive philosophies.