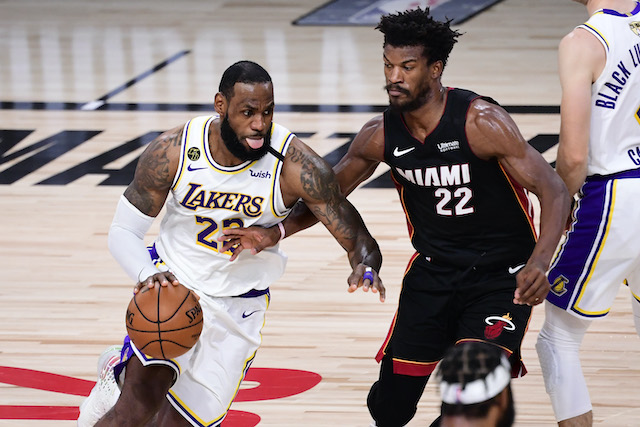 LeBron James knocked off Jimmy Butler and the Heat in the 2020 NBA Finals. (Getty Images)

NBA Hall of Famer and current NBA TV analyst Isiah Thomas offered the simplest and candid commentary on the 2020 NBA Finals matchup between the Los Angeles Lakers and Miami Heat.

“The Lakers are bigger. They’re faster. And they’re stronger,” Thomas said. “When the player is bigger than you, he’s faster than you and he’s stronger than you, the only thing that you can really rely on or depend on is if that player makes a mistake to give the smaller athlete a chance to win. But if that bigger, faster, stronger player doesn’t make a mistake the smaller player has no shot.”
“When I look at the Lakers and LeBron James and Anthony Davis, they’re not making any mistakes. So, consequently the smaller Miami Heat didn’t have a chance to win.”

The NBA playoffs are all about adjustments. Teams that can make the proper corrections during the course of a series usually comes out on top. But there’s only so much a coaching staff can do in terms of schematic tweaks. Even if the effort is there and the execution is nearly flawless, the team with the best talent eventually comes out on top.

The Finals inside the coronavirus-free bubble at the Walt Disney World in Orlando offered a fascinating chess match, pitting the Los Angeles Lakers’ two battle-tested playmakers in LeBron James and Rajon Rondo — who have appeared in more than 300 playoff games combined and have seen any imaginable defense during their storied careers — against the defensive-minded and mentally tough Miami Heat squad led by two-way players Jimmy Butler and Bam Adebayo. Styles create great matchups. In this matchup, the bigger and stronger Lakers presented the undersized Heat a huge challenge. Not only do the Lakers possess great size, but they were faster, more athletic and more experienced. It’s like competing against Thor in the Olympic hammer throw.

It was a daunting task for the underdog Heat, and it became nearly impossible after veteran guard Goran Dragic (foot) and Adebayo (neck) both suffered significant injuries that limited their impact in the series and disrupted the Heat’s regular rotation.

The championship series played out just as most of us expected. The Lakers jumped out to a quick 2-0 lead in the series thanks to the dominance of Anthony Davis and LeBron James. The Heat avoided getting swept thanks to a couple of historic triple-double games from Butler. But once the magic dust from Mickey’s wand disappeared, the Lakers’ size, length, depth and superior talent wore down the undermanned and overmatched Heat. The Lakers won each round in five games, knocking off All-Stars Damian Lillard, James Harden, Russell Westbrook, Jamal Murray and Nikola Jokic in the West before taking down two-time championship coach Erik Spoelstra in The Finals.

Spoelstra threw everything at the top-seeded Lakers, including the kitchen sink. But it wasn’t enough to derail LeBron from winning his fourth NBA title, Davis’ first and the 17th overall championship for the Lakers franchise, matching the Boston Celtics’ all-time record.

Here are a couple of observations from the NBA Finals.

Sizing up the Heat zone

L.A. has the best frontcourt in the league. They entered every postseason series with a significant size advantage and they used that edge to near perfection, using their great length to create mismatches on both ends of the floor. In an era when teams prefer to go small rather than go big, the Lakers are an anomaly. They are insanely long with a plethora of big men to deploy and a pair of big guards in Danny Green (6-6) and Kentavious Caldwell-Pope (6-5) who can smother the opposing team’s primary ball handlers. Dwight Howard (6-11) and JaVale McGee (6-0) rotate at center, but when head coach Frank Vogel decides to go “small” he inserts 6-8 Markief Morris at power forward, slides Davis to center, and plays LeBron at small forward. Vogel’s finishing lineup almost always includes their best defenders: Rondo, Caldwell-Pope, Alex Caruso, LeBron and Davis. Vogel also has the option of throwing in Green and Kyle Kuzma, depending on the matchups.

Spoelstra and his coaching staff were able to confound the Celtics with an inverted 2-3 zone defense in the Eastern Conference finals. The uniqueness about the Heat zone was Spo flipped it. The forwards were at the top and the guards were on the baseline with Adebayo patrolling the middle. It was highly effected against a center-less Celtics squad, but it was sliced up by the Lakers like a Papa John’s pizza. LeBron or Davis took turns flashing to the middle above the free throw line, which is what you should do against a zone. With LeBron or Davis collapsing the heart of the zone, it opened up the baseline for dunks and layups and freed up shooters on the wings and corners. When Howard was paired with Davis, he would roam the baseline for easy lobs.

Spoelstra threw a new wrinkle after the second game with a hybrid 1-2-2 zone and a little bit of a box-and-one whenever Davis was on the court. The clever plan worked for at least one game as the Heat were able to steal a game and make the executives at ABC very happy because it prevented an embarrassing sweep. But Spo and Heat could only fool the Lakers once. After LeBron and the Lakers coaching staff watched the film, they knew what to fix and cleaned up the sloppy mistakes.

Vogel utilized a smaller lineup in the next game, pairing Morris with Davis and LeBron up front. The Lakers also made more 3-point shots, which will force any team out of a zone defense. Caldwell-Pope, Green and Kuzma made seven of the team’s 14 3-pointers in Game 4, propelling the Lakers to a commanding 3-1 series lead.

Putting it all on the line

Let’s flash back to the 2006 NBA Finals. The Heat were down 2-0 and on the brink of getting wiped off the floor by the Dallas Mavericks. Enter Dwyane Wade. The then young superstar took over the series by forcefully attacking the basket and forcing the referees to make tough calls (some were not so tough). Wade lived at the free throw line throughout the series and the Heat eventually won in six games and Wade was named Finals MVP.

Flash forward to 2020. Jimmy Butler put his Wade cape on and lived at the free throw line in games 2 and 3. The Heat as a team made 31 of 34 free throws in Game 2, with Jimmy Buckets leading the way by converting 11 of 12 from the line. Butler revved it up in Game 3 as he went 12-for-14 from the line, seeking and searching for contact each time he drove to the basket.

You can paint it however you like. Whether you believe in conspiracy theories or not, you cannot deny the simple fact that referees play a big part in deciding games especially in the playoffs. It has been that way for ages. Butler and the Heat benefitted from several 50-50 calls that allowed the games to be close.

Best performance by a duo

There were two big reasons why the Lakers were able to dismantle the Heat: LeBron James and Anthony Davis. The Finals showed us what happens when two second-team All-NBA caliber players like Jimmy Butler and Bam Adebayo take on two first-team All-NBAers in LeBron and AD. As good as Butler was in the series, LeBron was better. And Bam may be an up-and-coming superstar, he is still not in Davis’ league. It boils down to this. The Heat have very good players, but the Lakers have two all-time great players. That’s the difference.

We haven’t seen a Lakers duo dominate The Finals like this since Shaquille O’Neal and Kobe Bryant. Davis’ 34-point output in Game 1 was the third-best opening act in The Finals since Shaq’s 43-point outburst against the Indiana Pacers in the 2000 Finals. Then, in the pivotal Game 4, Davis showcased why he was a first-team All-NBA defensive player. He was credited with four blocks, but altered at least a dozen shots. AD also took on the challenge of guarding Butler one-on-one, making it extremely difficult for the Heat forward to get to his favorite spots.

“The guy can do everything defensively,” LeBron said. “That’s why he’s the defensive player of the year.”

With AD taking the Butler assignment on defense, LeBron was able to save his legs on offense. After experiencing a hiccup against Butler in Game 3, getting thoroughly outplayed for the first time in his illustrious career and hearing about it from the media pundits for 24 hours in between games, LeBron rebounded nicely the rest of the series and summoned enough energy in his 35-year-old body to piece together another masterful MVP performance in The Finals.

In a league full of dynamic duos, the L.A. Lakers’ 1-2 punch of King James and The Brow delivered a memorable knockout performance to cap off the most difficult postseason run amid the coronavirus pandemic.