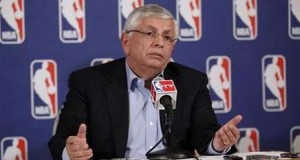 The Wall Street Journal recently published a story on the economic impact of the NBA lockout to the networks and advertisers. The amount of money lost had the 2011-12 season been canceled is astronomical. Money is the main reason why there was a lockout in the first place, but money was also the reason why the league and its players now have a tentative agreement in place that would end the labor strife.

Simply put, NBA commissioner David Stern and the Labor Relations Committee did not want to stretch the lockout beyond Christmas Day or late January. All those so-called NBA experts who were saying “the sky is falling” and “the season is lost” should have taken a closer look at this bit of information before they made their doom-and-gloom forecasts:

— Madison Square Garden Co., which owns the New York Knicks, in a November public filing said if canceled games aren’t rescheduled, the company’s financial results would see a “material negative effect.” The Knicks are unveiling the first phase of their $850 million renovation this year and planned to raise ticket prices 49% in the lower seating section.

Now, there is a small faction of hardliners, led by Dan Gilbert of the Cleveland Cavaliers, who didn’t mind missing games. But those same small-market owners also said they were holding out because they wanted more competitive balance, and they didn’t want another LeBron James-type episode where a player can hold a team hostage while he considers his free-agency options.

The players are willing to split the basketball-related income at 50-50. In return, all they want is to tweak the system to allow room for player movement. That’s all!

Union executive director Billy Hunter said weeks ago that the collective bargaining agreement was at the 2-yard line and a deal was on the table if the owners just loosened up some of their demands. Stern canceled games through Dec. 15, but purposely left the all-important Christmas Day schedule on the table. Why? Because ABC and ESPN have large stakes in this day and Stern does not want to disappoint his TV partners.

It’s all about the money. Always has, always will. There is way too much money at stake for the league to simply press the red button and nuke the entire season.