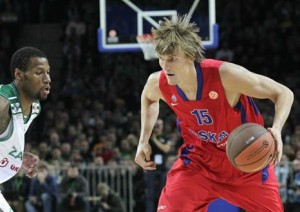 If not for the NBA lockout, Andrei Kirilenko would be in the United States preparing for his 11th season with the Utah Jazz. But with the NBA calendar wiped out through the month of November and labor negotiations continue to drag on, Kirilenko and other pros have made the trek to Europe to regain their fame and grab a little fortune as well.

The biggest beneficiary of Kirilenko’s European arrival has been CSKA Moscow. The top team in Russia currently is undefeated in the Euroleague standings and as long as the lockout persists, meaning Kirilenko will stay on the team, CSKA could have the most talented team in Europe.

Kirilenko and Khryapa are 6-foot-9 forwards, while Krstic is listed at 7 feet. In the backcourt, CSKA features Shved and Teodosic, who captured Euroleague’s top honor in 2010 and that same year was named to the FIBA World Championship all-tournament team while playing for Serbia. Teodosic can play point or shooting guard, while Shved is a 6-6, 22-year-old phenom who has been compared to Penny Hardaway. Watch his alley-oop dunk in EuroBasket 2011 against Finland off a feed from Khryapa.

Want more length? How about a couple of 6-11 centers in Darjus Lavrinovic and Sasha Kaun and 6-9 Andrey Vorontsevich. Kaun won a national championship at Kansas in 2008 and is only 26, while Lavrinovic, 31, was signed by CSKA in the summer after spending one season with Fenerbahce Ulker in the Turkish League. Vorontsevich is a member of the Russian national team who had 13 points in a 94-74 win over Brose Baskets.

Former Mississippi State standout Jamont Gordon, who signed with CSKA last year after a stint with Cibona Zagreb, gives CSKA another capable scorer in the backcourt. Forward Ramunas Siskauskas is a talented 6-6 forward who is averaging 11 points per game in three VTB United League games.

The terms of Kirilenko’s contract with CSKA is a three-year deal with an option to return to the NBA as soon as the lockout is over. So, as long as the NBA season is on hold, Kirilenko will remain in Moscow and that’s bad news for the rest of the clubs in the Euroleague.