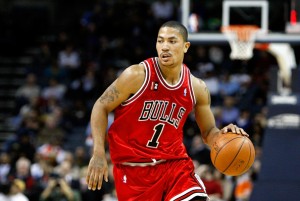 Chicago Bulls All-Star guard Derrick Rose may not be ready to return just yet. (GETTY IMAGES)

Derrick Rose won’t rush back just to play this season if he isn’t ready. That’s the message the Chicago Bulls star conveyed to reporters when his team visited Boston Wednesday night.

”If it’s where it’s taking me a long time and I’m still not feeling right, I wouldn’t mind missing this year,” said Rose, who tore the anterior cruciate ligament in his left knee during a playoff against Philadelphia nearly a year ago. He has not played this season, but he has been practicing and traveling with the team.

”I would love to play this year. I would love to,” the 2010-11 NBA MVP said. “That’s why I approach my rehab and my workout so hard. I’m trying to get back out there on the court as quickly as possible. But if I have anything later on there’s no point.”

Even though Rose hasn’t suffered any setbacks he admitted that he is unable to dunk, which concerns him a little bit. ”My leg still isn’t feeling right,” he said. ”I know if I could dunk off stride, I know I’d be out there playing. But I can’t.”

Rose said the team is not rushing him to come back. Which is the right approach because we’re talking about the face of the franchise here. With a healthy Derrick Rose, the Bulls are a championship team capable of taking down the defending champion Miami Heat, so rushing Rose to the court just to win a few games in February, March, and April is a gamble that pays very little.

”I’m working on my shot, but you’re not going to label me as a shooter,” he said. ”My game is always going to be driving.”

Rose has played three-on-three and one-on-one recently, and the Bulls are carefully organizing his workouts. The Bulls are currently in the fifth spot in the Eastern Conference and not too far away from securing home-court advantage in the first round of the playoffs. But the playoffs are far from Rose’s mind at the moment.