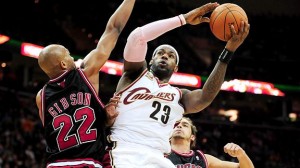 There are several reports that LeBron James could be headed to Chicago. But can LeBron coexist with Bull star Derrick Rose? (US PRESSWIRE)

LeBron James has been rumored to sign with the Chicago Bulls for a few weeks now, which has many Bulls fans thinking championship if those rumors come to fruition.

But not all are enamored with James joining forces with the Bulls’ young star in Derrick Rose.

Stephen Bardo, a former starting guard at the University of Illinois and part of Lou Henson’s Illini squad that reached the Final Four in 1989, is among those skeptics and isn’t sold on a James-Rose partnership with the Bulls.

On the court, Bardo says James will impede the progress of Rose because the two-time NBA MVP dominates the ball on offense and doesn’t quite know how to play well without the ball at this stage of his career. Off the court, James’ larger-than-life persona will ultimately overshadow Rose, a Chicago native, who is more of a reluctant superstar.

“It will kill Derrick Rose if the Bulls bring in LeBron James,” Bardo said on ESPN’s First Take Monday.

Bardo reasons that Rose is not a spot-up shooter, much like the way Cleveland has used Mo Williams the past two seasons. Rose is a classic “pounder,” which means he makes all his plays off the dribble and relies on his ball-handling to break down the defense. Rose and James are essentially the same player, and their one-on-one games simply don’t blend well. Both like to run isolation plays at the top of the key and both are accustomed to being the focal point of the offense.

What Bardo says is very true because James has not proven in his seven seasons in the league that he is comfortable at posting up and waiting for his guards to deliver him the ball. He might do it in the first quarter, but when the game progresses James reverts back to his old habits, which is forcing the action off the 1-4 set.

The 1-4 isolation set is also Rose’s favorite play, and has become really good at it. Bardo’s point is that there are only so many possessions in a basketball game and if both your superstar players have to fight for the same spot in the floor, the spacing becomes congested and the ball movement is stymied. This is equivalent to having two centers on the floor at the same time. Both will run into each other in the low block.

So, in theory, having James and Rose on one team appears like a good marriage. But in reality, there could be chemistry issues on the court.