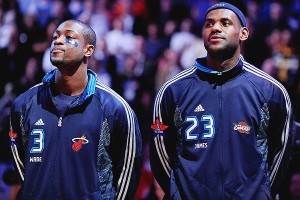 Dwyane Wade will always have a leg up on LeBron James in Miami. (GETTY IMAGES)

When James ditched his homestate team of Cleveland, Ohio, for a chance to play with not one but two of his All-Star buddies in Miami, Fla., it was loud and clear admission that the self-proclaimed King James can’t rule a kingdom on his own. Sadly, it was almost a cry for help. This is The Chosen One? The guy who is supposed to be the biggest and the baddest player in the Association and heir to Michael Jordan’s throne as the greatest player of all time? What a royal disappointment.

In James’ quest to conquer his first NBA championship, the 25-year-old two-time league MVP raised his right arm and waved for more troops. He needed Chris Bosh. He needed Dwyane Wade. He didn’t want to be in the frontline nor the backline. He just wanted to jump on someone else’s troop and win the battle playing as the second or third fiddle.

To put it in a New York Yankees perspective, LeBron is Alex Rodriguez and Wade is Derek Jeter. That leaves Bosh as Mark Teixeira. Much like A-Rod, James went lead role to a supporting actor, and didn’t mind it one bit.

Can you imagine Jordan teaming up with Isiah Thomas with the Detroit Pistons? Or, how about Larry Bird leaving Boston to play with Magic Johnson in L.A.? Can you see Kobe Bryant opting out of his contract with the Lakers and teaming with Wade and Bosh in Miami?

Miami is Wade County and American Airlines Arena is D-Wade’s house. Wade owns a championship ring and a Finals MVP trophy. Because he was The Guy who led the Heat to a championship in 2006, he will always be toast of the parties on Ocean Boulevard in South Beach.

During the Heat’s news conference at American Airlines Arena Friday night, James was introduced first, then Bosh and then Wade. Wade also got the loudest ovation from the more than 10,000 Heat fans in attendance. Then, during the session with the media, Wade sat in the middle of the table and was flanked by James and Bosh. That’s going to be the pecking order with the Miami Heat. Wade will always drive the Heat bus, with James and Bosh as his passengers.

Charles Barkley, one of only six regular-season MVPs to not win an NBA championship, said that  during his prime years in the league, it never even crossed his mind that he needed help from other All-Star players to win a title. In fact, Barkley thought he could do it on his own every year because he wanted to be The Guy.

Barkley wanted to be The Guy who took the last shot, grabbed the key rebound, made the crucial pass that led his team to victory and ultimately to a championship. That title never came, but at least Barkley never took a backseat to anyone. When he first arrived in the NBA in 1984 as a member of the Philadelphia 76ers – a team who won the NBA title the previous year and boasted Hall-of-Famers Moses Malone and Julius Erving – Barkley, in his mind, was the best player on the team. He didn’t care if Moses or Dr. J were on the same court.

“If I was 25, I’d try to win [a championship] by myself, not technically to win it by myself, but I would make sure I was The Guy on the team,” Barkley said on NBATV. “We just started giving Kobe Bryant credit the last two years. There was that stigma that he hadn’t won without Shaq. You see, we have elevated him because he won the last two as The Guy. And LeBron is never gonna be The Guy. Dwyane Wade has already won a championship, so it’s his team.

“I still think LeBron is the best player in the NBA. But there is a knock – and it is a fair knock – because the reason why I say that is if we’re gonna use the same criteria on Kobe Bryant we have to use it on LeBron James also.”

Barkley said he was disappointed James didn’t stay with the Cavaliers because winning a championship in a title-starved city like Cleveland would have been sweeter, especially for a player who grew up in nearly Akron and is all too familiar with the sad sports history of Cleveland, Ohio.

Barkley is completely miffed at the fact that James, who at 25 is very much in the prime of his professional basketball career, would choose to defer to another superstar just to win a title. In other words, LeBron took the shortcut instead of staying on the long road to the promised land. Barkley used Karl Malone and Gary Payton as examples of two basketball legends who stuck it out on bad teams, hoping to win titles as the leaders of their respective teams.

“They tried to win it by themselves. That’s why I admire and respect those guys,” Barkley said. “They did go the Lakers and Gary went to Miami to win a championship, but they didn’t try to piggyback on anybody else early in their careers. When you’re 25, you shouldn’t have to piggyback on other people.”

James said during his one-hour made-for-ESPN special Thursday night that the No. 1 reason why he decided to join the Heat was because he felt, with Wade and Bosh in the fold, Miami gave him the best chance to win a title, which is an unwarranted indictment on the Cavaliers organization, owner Dan Gilbert and former GM Danny Ferry.

“Let’s be realistic. Cleveland, to me, they were still one of the five or six best teams in the NBA. Think about that,” Barkley noted. “They lost to the Celtics, that was a tough matchup. You take away Orlando and they’re still in the mix as the best team in the East, and other than the Lakers in the West, they would have been in the mix. [Cleveland] has had the best record in the NBA [the last two years] so it wasn’t like he was playing on a bad team. So I wished he would have tried to win it by himself as The Guy.