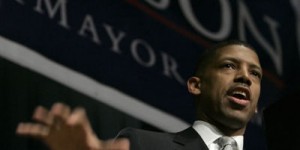 Former NBA star Kevin Johnson, now Mayor of Sacramento, plans on helping the homeless who are forced to live in "Tent City."

Of the 6,711 assists Kevin Johnson has dished out throughout his 13-year NBA career, he recently delivered an even bigger assist to the financially troubled people of Northern California – this time as the Mayor of Sacramento.

A tent city that sprang up in the California state capital of Sacramento and became a symbol of the country’s desperate economic plight is to be closed within three weeks, the Sacramento Bee reported on March 20.

Mayor Johnston, born and raised in Sacramento and attended Cal Berkeley, said the plan was to move hundreds of the tent city residents to “safer, more sanitary” quarters and cordon off the pasture that they had called home.

The makeshift settlement got international attention last month when Oprah Winfrey filmed a segment at the site showing the deplorable conditions, with people living without running water, electricity or toilets.

According to the Bee, though the camp was seen as a stark illustration of the impact of the housing crisis, local reports have noted that most of its occupants have been homeless for years and that only a handful are people who have recently lost their jobs and homes due to the current economic crisis.

Johnson said the city has identified 150 beds that can be used immediately for temporary and permanent housing for tent city residents, while other members of the camp could be housed in modular units at an exhibition centre or in subsidised “shared housing” apartments.

Job losses, home foreclosures and a deepening recession are sending scores of newly homeless people into a makeshift camp along the banks of the American River in Sacramento, reported National Public Radio.

The tent city, spread over an area the size of several football fields, has local officials scrambling over how to handle the area’s homeless crisis.

More than a year ago, a handful of homeless people staked out the site on the northern edge of downtown Sacramento. Now there are more than 100 tents and anywhere between 300 to 400 people living without running water or sanitation. Their only protection from the elements is nylon tents and plastic tarps.

A single mid-day meal is available at a nearby faith-based charity called Loaves and Fishes. That’s where social worker Jim Peth says he’s seeing a lot of the newly homeless.

“That’s been very recent,” Peth says. “And you can tell because they’re much better dressed. They’re disoriented; they don’t know where to go. So they’re easy to spot.”