Holy Jimmy Chitwood! The Butler Bulldogs are in the national championship game. In a tournament that has seen more one-shining-moments in recent memory, Butler just became the shining example of why America loves the NCAA Tournament.

Behind a rock-solid defense, the No. 5-seeded team from Indiana reached the championship game after overcoming Michigan State, 52-50, in one of the national semifinal games at Lucas Oil Stadium in – where else – Indianapolis.

Next up for underdog Butler is mighty Duke University – the last remaining No. 1-seeded team in the tournament.

Does Butler feel lucky to be in Final Four? Not at all. This is a squad that has won 25 in a row and was a preseason top-25 team.

“This team and this program has been built on guys ready to come in and contribute for the good of the team. It makes me proud to be their coach,” Stevens said after the win over Michigan State. 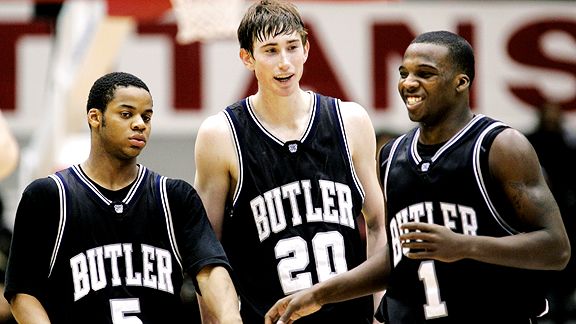 Duke against Butler is a matchup straight from the pages of Hollywood. The gap between the two schools when it comes to notoriety and accomplishments are about as long as a film strip.

However, the daunting task placed in front of them is met with quiet confidence. “I think our biggest strength is that we don’t know any better,” said Bulldogs guard Ronald Nored.

Duke has won three national championship banners since 1990 while Butler has none.

Duke has a roster filled with McDonald’s High School All-Americans while Butler’s players frequents McDonald’s during the season.

Duke’s campus is known for its Cameron Crazies while Butler is known for being the location of the movie “Hoosiers.”

Jimmy, Buddy and Ollie…they’ve been replaced with Gordon, Shelvin and Ronald.