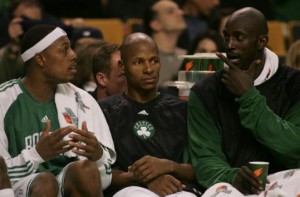 Paul Pierce, Ray Allen and Kevin Garnett are shouldering too much of the burden on offense and defense for the defending world champions. (THE BOSTON GLOBE)

Something is definitely wrong with the Boston Celtics.

Though the defending NBA champs are still a major driving force in the East, the Celtics’ high-powered engine is beginning to leak and their once tireless energy on defense is showing some wear-and-tear. Coach Doc Rivers also hinted the team is severely missing two key cogs from last season’s championship run: James Posey and P.J. Brown.

Both were outstanding bench players during the 2008 NBA playoffs, and their absence has exposed the Boston bench and forced Rivers to rely more on Paul Pierce, Ray Allen and Kevin Garnett, who is beginning to show signs of fatigue.

Garnett may not admit it, but he’s not the same player. The effort and the intensity is still there but KG’s offense has fallen dramatically and his rebounding has become just average. KG still wants to push forward, but his gas tank is running close to empty.

To compound matters, The Big Ticket recently got punched out of the lineup when he injured his knee against the Denver Nuggets. He will be sidelined two to three weeks.

The loss of KG, coupled with the way the bench has disappointed this season, GM Danny Ainge rolled the dice by acquiring point guard Stephon Marbury and forward Mikki Moore. Instead of adding younger legs to an aging roster, Ainge took on two old individuals who know nothing about winning.

Marbury’s selfish acts are well documented. He’s all about himself. When he arrived in New Jersey, the Nets got bad. When he was traded to Phoenix, the Suns became average. When he landed in New York, the Knicks went into the tank.

Moore is a journeyman who has never played for a contender. His best years were spent in Sacramento when the Kings were far removed from playoff picture.

The loss of Posey – who signed with New Orleans during the offseason after Ainge refused to sign him to a longer deal – has had a more dramatic impact on the Cs. Boston was hoping 6-1 guard Tony Allen would stem the loss of the 6-10 forward, acting as the Celtics’ sixth man. But Tony A. has been a huge disappointment. He has struggled from the field all season and, for someone who is known for his defense, Allen has not been able to impose his will on that end of the court. Last season, Posey gave the Celtics solid defense and timely shooting off the bench.

Brown is retired and seems perfectly satisfied with one championship ring on his finger. Boston’s small front line could definitely use Brown’s size and experience (6-11, 255) in the interior, something 6-6 Glen “Big Baby” Davis and 6-6 Leon Powe will never be able to provide. Big Baby and Powe are both overmatched inside and neither is capable of stopping the other team’s post player.

Though he has vastly improved his offense this season, starting point guard Rajon Rondo is far from a finished product. Rondo is still limited offensively, relying too much on that one-handed runner. It will also be interesting to see how he responds to having Starbury in his ear (as if the kid from Kentucky does not get enough lip service from KG, Doc and Pierce).

After starting the season 27-2, Boston is only 17-11 since and 1-3 against its two main competition for the Larry O’Brien trophy: Cleveland and the L.A. Lakers.

If the Celtics wish to return to the NBA Finals, their bench will need to play better and take pressure off The Big Three. The question is, “Are they capable?” We’ll soon find out.