Even though there are still 79 games on the schedule, the Boston Celtics have posted three impressive victories thus far.

The Celtics defeated the Cavaliers on opening night 95-89, and their last two victories have been blowouts. They limited the Bobcats to 59 points and took apart the Bulls 118-90 on Friday night. That’s 101.6 points per game while limiting the opposition to a paltry 79.3. 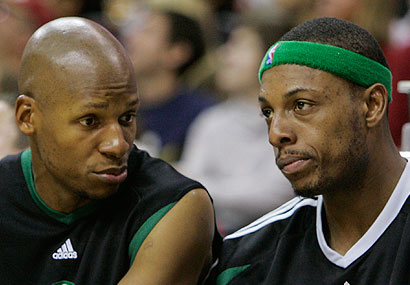 Ray Allen and Paul Pierce continued their torrid shooting against the Bulls, a carry-over from the epic seven-game series between the two teams last season. Pierce was 5-of-7 from threes (22 points) and Allen was 2-of-3 (20 points).

But that highly competitive series is a thing of the past and the Celtics made sure to send a statement to the Bulls that this Celtics team is far different from the one that struggled against them in the postseason.

For one, Kevin Garnett is back and, so far, the bum knee that sideline him in last season’s playoffs is not an issue. New Celtics Rasheed Wallace and Marquis Daniels have also bolstered the Boston bench.

Coach Doc Rivers says he wants to monitor Garnett’s minutes this season to ease him back to health. Well, Rivers hasn’t had to extend KG too much with these one-sided games as the Big Ticket has played less 30 minutes per game.

I know the NBA title can’t be won in the first week, but the Celtics are off to a great start and it’s hard to ignore that.