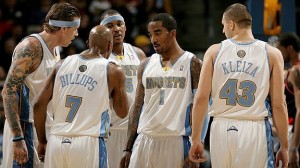 In Detroit, Zeke, Lam, The Worm, Buddha Edwards and Spider Salley helped form the Motor City Bad Boys. In Los Angeles, Magic, Coop, Big Game James, The Captain and Riles were the core of the Showtime Lakers. Golden State’s dynamic, high-scoring trio of Tim Hardaway, Mitch Richmond and Chris Mullin were better known as Run-TMC. Then there was The Jordannaires, Michael Jordan’s famous “supporting cast” with the Chicago Bulls.

Throughout its rich history, the NBA has had its share of colorful characters from unforgettable teams with distinct nicknames that leave a lasting impression on hardcore basketball fans.

The 2008-09 Denver Nuggets currently does not have a moniker, but badly needs one. Dallas Mavericks owner Mark Cuban recently tried to brand the Nuggets by calling them a bunch of “thugs” for the physical abuse they dished out to Dirk Nowitzki and Co. But thugs may not be the politically correct term to use here. Even though some of the Nuggets players, covered with in some of the most impressive tattoos in the Association, look like extras in “Menace II Society” they still do not deserve the thuggish label. 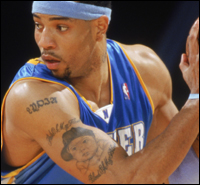 Nuggets forward Kenyon Martin wears the image of his son on his right bicep. (NBAE/GETTY IMAGES)

One thing is for sure, the Nuggets are not short on individual nicknames. All-Star forward Carmelo Anthony goes by “Melo.” Denver fans refer to sharp-shooting guard J.R. Smith as “J.R. Swish.” Power forward Kenyon Martin is “K-Mart.” Bench player Chris Andersen, with his noticeable fro-hawk and his arms stretched like a condor’s wings with each block, has become a fan favorite at the Pepsi and is known as “The Birdman.” And starting center Nene is from Brazil, so he only needs one name.

With all their colorful body art and their newly found swag, this year’s Denver unit is one eclectic group. They’re so colorful they put the old Denver Nuggets uniform – the same one that Alex English, Fat Lever, Blair Rasmussen and Dan Issel were rocking during the 1980s – to shame. And ever since acquiring Chauncey Billups (aka Mr. Big Shot), they’ve been playing with great energy and passion that electrifies their home crowd. Eclectic? Electric? Hmm. That’s it! The Denver Nuggets are The Eclectic Company.

The Eclectic Company will take their show to Hollywood after earning a date with the Los Angeles Lakers in the Western Conference finals.