By now most of you have read Jason Whitlock’s column on Fox Sports about the relationship between Los Angeles Lakers guard Derek Fisher, the National Basketball Players Association president, and NBA commissioner David Stern. That was followed with another Whitlock column about a rift between Fisher and union executive director Billy Hunter.

According to Whitlock, Hunter and at least one member of the union’s executive committee confronted Fisher about their belief that Fisher’s push for a 50-50 basketball-related-income split with NBA ownership was part of a deal Fisher had privately cut with David Stern and/or Adam Silver to deliver the union at 50-50.

In response to Whitlock’s story, Fisher issued this statement to the players via e-mail on Tuesday: “Usually I wouldn’t even dignify absurd media reports with a comment. But before these reports go any further, let me say on the record to each of you, my loyalty has and always will be with the players. Anyone that questions that or doubts that does not know me, my history, and what I stand for. And quite frankly, how dare anyone call that into question. The Players Association is united and any reports to the contrary are false. There have been no side agreements, no side negotiations or anything close. We are united in serving you and presenting the best options and getting everyone back to work. The attempt by ‘sources’ to divide us will be unsuccessful. We will continue to work every day to do right by you, the businesses that depend on our league and our fans.” 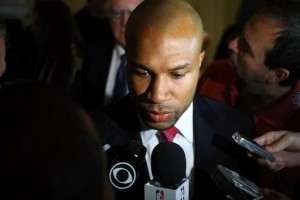 Derek Fisher says he remains loyal to the union and denies any side deals with NBA commissioner David Stern. (GETTY IMAGES)

You could almost feel the frustration in Fisher voice as you read his note, and he is willing to put his reputation on the line to get his point across.

I’m going to defend Fisher on this one.

I have had the privilege to speak to Derek Fisher on more than one occasion as a member of the Los Angeles media covering the Lakers. I have followed his career since the day he became a Laker in 1996. I saw his first-ever pro game while playing for the Lakers summer league team 15 years ago. I have seen Fisher go from little-known reserve guard to starting guard for the five-time world champion Lakers. I have seen Fisher grow from an inconsistent jump shooter to one of the best clutch shooters in the history of the game.

Whenever I spoke to Fisher, he always looked me in the eye and articulated his message in a very calculated and well-thought-out manner. Unlike many NBA players, Fisher is genuine and truly cares about his job. You may not get a true sense of what he is all about by watching him on the court because, quite frankly, the man plays like a bulldog and is not afraid to bite back.

But in reality, Fisher is about as level-headed as they come off the court and is very balanced. He is a real stand-up guy. Having said that, I don’t think there was a side deal between Fisher and the league. I just can’t imagine Fisher, who has never backed away from a challenge, giving in and taking shortcuts. That’s not who Fisher is, and TNT’s David Aldridge agrees with me.

“Derek Fisher has killed himself these past eight months. He must have gone across the country 20 times,” Aldridge said on NBA TV. “I don’t buy at all the notion that Derek Fisher has somehow gotten a side deal with David Stern. I just don’t believe that knowing how hard Derek Fisher has worked in trying to get a deal done for the players. Is Derek and Billy on the same page at everything? I’m sure they’re not. I’m sure David Stern is not 100 percent in agreement with the owners. We know that for a fact because Micky Arison just paid $500,000 [for comments he made recently].

“Derek Fisher doesn’t do side deals with anybody. I don’t believe that. This is a high-character guy.”

Now, I’m not going to say Whitlock is in the wrong here either. I’ve never met Whitlock but I am very familiar with his writing, and is a well-respected journalist. It is not clear who his source is, but one thing that is clear is Whitlock has put his reputation on the line by building his story around this source.

Before we shame Fisher for this alleged deal with Stern let us not forget the fact that Fisher is not a lawyer. He is a basketball player and he is merely thinking and acting like a basketball player during these labor talks. Hunter, on the other hand, is a veteran lawyer who knows a thing or two about negotiating labor contracts. Hunter has far more experience in these heated negotiations than Fisher.

So, why is Fisher getting crucified for acting and thinking like a basketball player?

Fisher is smart enough to know that if a 50-50 deal is the only roadblock in the lockout then he’s probably saying to himself “let’s do this!” And I’m sure he’s not alone. He probably heard enough voices in the players’ union that a 50-50 split is acceptable.

As union president, Fisher has to pacify the superstars and the non-superstars. He has to please Stern and Hunter. And he has to deal with the agents who is at the forefront of the BRI battle. Try wearing Fisher’s shoes for a change and see how you deal with all this nonsense. I got your back, D-Fish.