All championship teams have great role players – guys who play their position, make all the hustle plays and knock down shots when called upon.

Since Horry retired, his former teammate, Derek Fisher, has now become the best role player in the NBA.

Fisher showed his value during a hotly contested Game 3 of the Western Conference semifinals against his former team Saturday night when he knocked down a key 3-point shot with 28 seconds left that put the Lakers ahead, 109-108, a lead L.A. never relinquished. The Lakers won, 111-110, and now have a commanding 3-0 lead in their best-of-series against the Jazz.

“He’s done that before. He’s one of those guys who is a tough guy. He played for us and was a great competitor,” Jazz coach Jerry Sloan said of Fisher, who played for the Jazz in 2007, but asked to be released so that his ailing daughter could get better treatment and L.A. was one of the places she could receive better care.

“A big loss for our team when he left. But that’s life,” Sloan added. “He gave us toughness, and he made a lot of shots like that for us. He was a wonderful guy to coach, a real professional.”

Fisher was 3-for-7 from 3-point range in Game 3 and finished with 20 points. And even though Deron Williams had 28 points, Fisher made him earn every point and even frustrated the Jazz All-Star point guard at times. And Fisher’s knowledge of Utah’s sets on offense has been a very valuable scouting tool for the Lakers’ coaching staff.

“Fish just being Fish. What more can you say. This is something he’s done his career,” Kobe Bryant said of his 35-year-old backcourt partner, now in his 11th season with the Lakers. “Even with things that don’t show up on the stat sheet: his recognition, his ball movement, his spacing, and obviously knocking down big shot after big shot. That’s something that he does.” 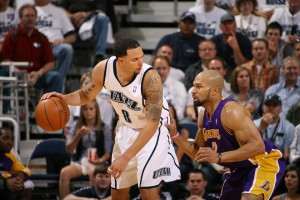 The Lakers attempted 29 3-point shots in Game 3, and Sloan said that was by design to try to combat the Lakers’ size advantage. Unfortunately for Sloan and the Jazz, the Lakers converted 13 of them.

“To try to help out our big people to keep the ball out of the middle, we gave them a lot of 3-point shots. We felt that gave us a chance to win the ballgame, and that probably got us,” said Sloan.

Fisher, Bryant and Ron Artest were a combined 10-for-21 from behind the arc.

Phil Jackson says he never worries about Fisher because the Lakers coach is confident the 14-year veteran will always make the right decision. That trust is the main reason why Jackson makes sure the dependable Fisher is on the court during crunch time, affording the Lakers two fourth-quarter closers – a luxury most playoffs teams don’t have.

Fisher has delivered timely shots during his outstanding Laker career, a career that includes four NBA championships and six trips to The Finals. No other role player on a current NBA roster has four championship rings.

In 2001, Fisher came back from a stress fracture on his right foot to help the Lakers sweep through the playoffs and finish 15-1. Fisher established an NBA postseason record for most 3-pointers made in a four-game series with 15 in the Western Conference semifinals against San Antonio.

Then, in 2004, Fisher killed the Spurs again when he made one of the most memorable buzzer-beaters in playoff history when he sank a game-winning shot in 0.4 seconds.

The Fisher Fling was the defining moment of his career until the 2009 NBA Finals when he made two clutch 3-point shots against the Magic in Game 4. With his team down by three, Fisher drained a 3-pointer at the end of regulation to send the game into overtime. He then buried the dagger 3-pointer late in OT to seal the deal.

Defensively, Father Time has taken away Fisher’s foot speed and he’s never going to be mistaken for being a shutdown defender. However, he is still  a scrappy defender and never backs down from a challenge. He always finds ways to contribute, taking charges, helping out on close-outs, sacrificing his body by bullying his way through screens and diving for loose balls. Those are the little things that lead to big parades in June.

“He played a great game,” Jackson said of Fisher’s Game 3 performance. “He hit some shots, made some defensive plays I thought were good out there on the floor. Just his tenacity is a factor for us.”

Fisher is one of the most physically and mentally tough players in the league, and his calming influence in the locker room should never be underestimated. He’s probably the only player inside the Laker locker room who has earned Kobe’s trust. Because of Fisher’s reputation for being a stand-up guy, he can act as a buffer between Bryant and Jackson.

Since Fisher returned to L.A. in 2007, it is no coincidence the Lakers have been to the NBA Finals two years in a row and are about to reach their third consecutive Western Conference finals.

His true value can’t be measure by statistics, and he’s the glue that holds the Lakers together.