Injuries are always going to play a major role in sports, but they get magnified in the playoffs, and especially when it’s a star player. Derrick Rose of Chicago and Kobe Bryant of Los Angeles were both questionable with sprained ankles as they headed into Tuesday’s games, but like the warriors they are, their ankles weren’t a problem.

The Bulls went into their Game 5 matchup with Indiana looking to send the pesky Pacers home, and the focus for those betting on the NBA spread was on Rose’s ankle as he was seen in a walking boot prior to tip-off. But during the game, the only worry for Rose was foul trouble, and he even shook that off to drop 25 points in a 116-89 thrashing of the Pacers at home. Rose fueled a third-quarter run that put the game out of reach for the Bulls, and now he has a couple of days to rest his ankle before the next round.

The Lakers were a bit more worried about Bryant heading into their Game 5 clash with New Orleans, but all questions were answered in the second quarter when Bryant drove the lane and dunked on Emeka Okafor, which really gave the Lakers a spark en route to a 106-90 romp. 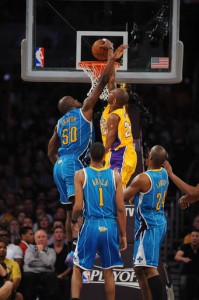 Bryant was one of six Lakers in a balanced performance, but clearly he was the star of the show and it brought us back to young Kobe, the one who wore No.8 and had a small afro back in the day when he was taking Brandy to his prom. Young Kobe did that seemingly once a game and if you were in his way, you were in trouble. It was also encouraging to see that Bryant didn’t have to jack up 30 shots for the Lakers to be effective; they feed off his energy regardless.