OneManFastBreak.net lists the second- and third-year players who will make the jump from above-average player to budding superstar.

KEVIN DURANT, Oklahoma City Thunder, Forward
Mark this down: Kevin Durant will be in the 2009 All-Star Game in Dallas, and he won’t be playing on All-Star Saturday Night. He’ll be playing in the big game on Sunday. If not, then there is something very wrong with the current system. This season’s All-Star Game, which will be played in spacious Texas Stadium, will be a homecoming of sorts for the 21-year-old small forward since he played at the University of Texas. In his second NBA season, Durant averaged 25.3 points per game. When he won Rookie of the Year in 2008, he averaged 20.3. Expect Durant to hit the 25-point mark again in year three of his young pro career. 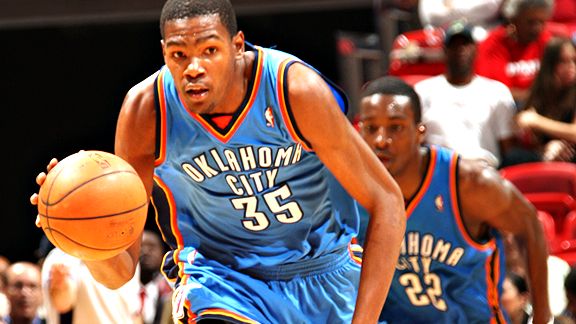 DERRICK ROSE, Chicago Bulls, Guard
This is a no-brainer. Rose is the reigning NBA Rookie of the Year and had a coming-out party during the first round of the Eastern Conference playoffs against the Boston Celtics. Now that Ben Gordon is gone, Rose will be asked to do a little more scoring this year, as well as organize Vinny Del Negro’s offense. Last season, Rose averaged 16 points a game and 6 assists.

O.J. MAYO, Memphis Grizzlies, Guard
Mayo was arguably the top rookie of the first half of the regular season in 2008-09. But he hit somewhat of wall in the second half and Rose surpassed him in the voting. But Mayo – who averaged 18 points a game in 82 games as a rookie – is a talented young player with a skill set built for the long haul, and I anticipate the former USC star to be THE star for the Griz.

AARON BROOKS, Houston Rockets, Guard
The third-year point guard out of Oregon will be asked to run the show in Houston now that Yao Ming is sidelined with a career-threatening injury and Ron Artest is now in Los Angeles. Brooks burst into the spotlight during the 2009 playoffs, giving the Lakers’ guards fits in a hotly contested seven-game series. Head coach Rick Adelman believed in Brooks so much that Houston traded away starting PG Rafer Alston to Orlando last season, handing the keys to the franchise to the 5-11 lightning-quick guard with a deadly outside shot.

BROOK LOPEZ, New Jersey Nets, Center
With Lopez and Devin Harris, the Nets have nice 1-2 punch at center and point guard despite the loss of Vince Carter, who departed for Orlando. Lopez (7-0, 260) is a legit center with a legit post-up game. He has a nice jump hook going to his right and can barrel his way to the basket when forced to his left. Not many NBA centers have a second move so Lopez is already ahead of the game.

KEVIN LOVE, Minnesota Timberwolves, Forward
K-Love may not excite anyone with his game but his fundamentals are off the charts when it comes to playing the power forward position. He has excellent hands, which allows him to catch any pass thrown to him, be able to rip rebounds away from the opposition and throw those Unseld-like outlet passes. During his rookie season, he averaged 11 points and 9 rebounds so expect those numbers to go up with one year under his belt.