Dwight Howard calls the 2012-13 season with the Lakers a “nightmare.” (GETTY IMAGES)

Drama seems to follow Dwight Howard wherever he’s at. He was like a petulant child in his final days in Orlando, holding the team hostage for months because he couldn’t make up his mind. Now, the drama has shifted to Los Angeles where Howard is again at the center of a firestorm that will undoubtedly exhaust the Lakers franchise this offseason.

Howard will be a free agent this summer and could leave L.A. for another city. In what may be his final game in a Laker uniform, Howard scored seven points, grabbed eight rebounds, and had five turnovers in just 20 minutes because he was ejected in the third quarter for arguing with an official after he felt he wasn’t getting the benefit of the calls against the Spurs big men. Howard walked off the court, briefly ran into Lakers general manager Mitch Kupchak in the tunnel and had some choice words about the officiating.

It wasn’t exactly the image the Lakers envisioned when they acquired Howard during the offseason. He was suppose to help Kobe Bryant win championship ring No. 6 and serve as the Lakers’ next great franchise player of the future.

The season didn’t go as planned and, when the Lakers needed Howard the most, he folded his tent and literally left the building. As much as we’d like to think that Howard didn’t quit on his team, it certainly begs the question.

Magic Johnson had the same thought when he tweeted this message to Laker Nation moments after the Spurs eliminated the Lakers from the playoffs: “Dwight with an already depleted team you couldn’t afford to foul out or get kicked out. Having you on the floor was the only chance for the @Lakers.” 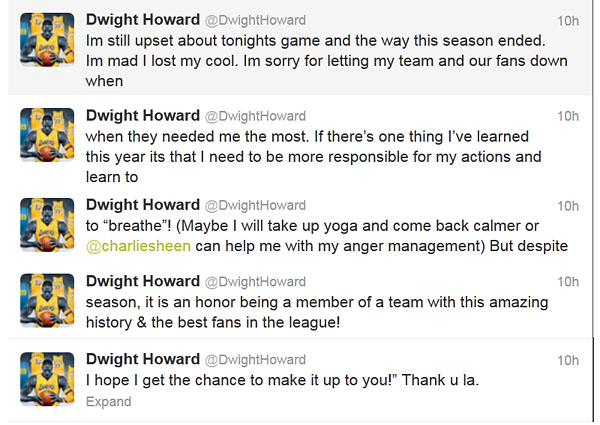 The four-game sweep was a fitting conclusion to a season Howard described as a “nightmare.”

“It’s like a bad dream, and we just couldn’t wake up from it. That’s what it felt like,” Howard said. “It seemed like nothing could go right, right from the start, injuries and all that stuff. We get an opportunity to get some rest for guys who are injured. A chance to rehab and think about what we can all do to better ourselves.”

When Yahoo! Sports writer Marc Spears asked Dwight if the last part of that statement reflected optimism toward returning, Howard said: “You’re reading too much into it.”

One of Howard biggest critics is Shaquille O’Neal, who knows a thing or two about playing center for the Lakers. O’Neal said on TNT’s postgame show Sunday that the first thing Howard needs to do is change his attitude and approach to the game. “Dwight is a power player and he needs to get some power moves. This is his seventh or eighth year and I’m disappointed that he doesn’t have a go-to move where he could score every time. The rest is just all heart and determination.”

O’Neal recalled when he acted up like Howard, complaining to the refs and whining about not getting enough calls. But Shaq said former Lakers assistant coach Bill Bertka convinced him that he needed an attitude adjustment. “I used to be like Dwight, doing stupid stuff and getting techs. Bill Bertka, Phil Jackson, and my father Phil Harrison told me ‘Do you see Kareem [Abdul-Jabbar] complaining?’ No. Kareem went out, dominated, and won championships. The way to combat [the bad calls] and defeat that is to go out and dominate.”

Charles Barkley said Howard needs to spend more time with former Rockets great Hakeem Olajuwon and learn some post-up moves because Howard is severely limited when it comes to low-post skills. “He doesn’t even know how to post up,” Barkley said. “He’s a very good rebounder and shot-blocker, but offensively he hasn’t gotten better.

“You notice he gets one or two offensive fouls a game because he doesn’t know how to post up. He’d post up with his arms way down. When you post up, you put your arm up. You don’t swing your arms. I like him a lot as a person, but as a player he’s got a long way to go.”

From strictly a financial standpoint, it would be better for Howard to re-sign with the Lakers because the team could pay him a five-year, maximum $117.9 million contract. If he signed somewhere else, he’d only get a four-year deal worth around $87 million. Howard would have to walk away from $30 million on the table if he decides to leave the Lakers. That alone should be an indication that Howard is leaning heavily toward re-signing with L.A., which is not good news for Lakers management because — based on the last two seasons — he has proven be undependable and unfit to be the face of a franchise.

Howard says he’s going to reflect on the season and clear his head. What the Lakers should do is clear his locker room and plan on not having him for the foreseeable future.