It is a first-time honor for all but Navarro, the 2009 Euroleague MVP and 2010 Euroleague Final MVP, who was named All-Euroleague First Team for the fourth time. Kleiza, who played for the Denver Nuggets last season, won the Alphonso Ford Top Scorer Trophy. Khryapa received the Euroleague Best Defender Trophy and the Rising Star Trophy went to Ricky Rubio, 19, of Barcelona, the youngest winner of an end-of-season award ever in the Euroleague. 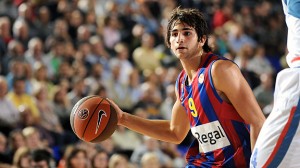 Rubio was the fifth overall pick in the 2009 NBA draft, but opted to play in Europe. The Minnesota Timberwolves hold his draft rights. Rubio and Navarro, teammates on Spain’s national team, recently led Barcelona to a victory in the Euroleague Final over Olympiacos.

The 2009-10 All-Euroleague second team featured Bo McCalebb of Partizan at point guard, CSKA forward Ramunas Siskauskas, forward Josh Childress of Olympiacos, forward Erazem Lorbek of Barcelona and center Tiago Splitter of Caja Laboral. Siskauskas, the 2008 MVP, is a second-team selection for the third time. He was also on the first team and was MVP in 2008.

Euroleague.net contributed to this report.