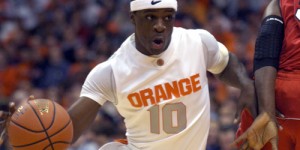 Jonny Flynn’s one shining moment came and went in March during the Big East Conference tournament when he played 60-plus minutes in a five-overtime classic against Connecticut. Other than that one incredible night of Ironman basketball, Flynn’s resume is unspectacular. And, if you look closely at the Syracuse point guard’s overall dexterity, his shortcomings outweigh his great potential.

Syracuse alums don’t usually pan out in the NBA. There are a few exceptions, such as Dave Bing, Carmelo Anthony, Sherman Douglas, Rony Seikaly and Derrick Coleman, but more often than not Syracuse players don’t last long in the pros, and the majority of them end up as footnotes in the NBA history books. All signs point to the same fate for Flynn, who is too short (he’s listed at 6-0 but could be about 5-10), he doesn’t have a consistent jump shot, his play-making is questionable and is a very, very average defender.

It’s not to say that Flynn will be a complete failure in the Association; he could be a decent pro player. However, decent does not mean being the sixth-best prospect in the NBA Draft and the Minnesota Timberwolves should taper their excitement with their selection. Here are five names – all former guards at Syracuse under Jim Boeheim – to ponder:

1) Dwayne “Pearl” Washington (1984-86) – If there ever was a product of TV hype, it was Pearl Washington. He built up such a reputation that teams didn’t bother looking at his weaknesses, which he had plenty of. The New Jersey Nets took him with the 13th overall selection in 1986 and it took the Nets just two years before finally figuring out that Pearl Washington was not that much better than Denzel Washington on the basketball court. By age 25, he was already out of the league.

2) Lawrence Moten (1992-95) – A prolific scorer in college, but could barely get his hands on the ball at the NBA level. Moten averaged 19.3 points per game during his four-year career with the Orange. In his three years in the NBA, LoMo was NoMo, averaging just 6.3 points and played in only 119 games. He spent his first two years in the league in Vancouver and ended his career as a Washington Wizard.

3) Gerry McNamara (2003-06) – Sharp-shooting Gerry Mac was a member of Boeheim’s national championship team in 2003. Despite four successful years in college, McNamara went undrafted in 2006. He has gone back and forth from Europe to the Developmental League, but has never made an NBA roster. The closest he ever got was getting a training camp invite from the Utah Jazz. Defense was McNamara’s biggest problem. He was protected by the zone defense in college, but was exposed at the pro level.

4) Adrian Autry (1991-94) – Played most of his college career with Moten and was an All-Big East performer. Autry was a big guard (6-4), but his lack of quickness and his inability to consistently hit a jump shot basically killed his pro future. Autry went undrafted in the NBA and spent all of his pro career in Europe, playing in Turkey, Germany, Italy, France and Poland.

5) Preston Shumpert (1999-2002) – During his junior and senior seasons at Syracuse, Shumpert averaged 19 and 20 points per game, respectively. He was a pure shooter and made almost 38% of his 3-pointers. But like many Orangemen who have played under Boeheim’s famed zone defense, Shumpert was not a good one-on-one defender. After going undrafted in the NBA, Shumpert played six seasons in Italy and has spent the last two seasons in Turkey.