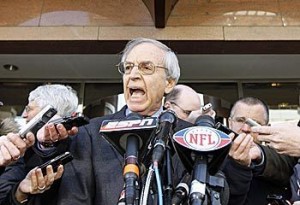 The NBA has a messy divorce on its doorstep. The NBA players association want their share of the basketball-related income (BRI) and don’t want to be capped on their spending habits, while the owners claim they are out of money and blame the players for maxing out their credit cards.

So, with billions of dollars at stake and the season in serious jeopardy, both sides have drawn a line on the sand and summoned a third-party negotiator to settle the argument. Enter George Cohen.

Who is George Cohen? He is a mediation attorney and the director of the Federal Mediation and Conciliation Service, which provides free mediation service in contract negotiation disputes between employers and their unionized employees.

He was also a member of the National Hockey League Players Association advisory board before being appointed to the head of the federal mediation service by President Barack Obama. Cohen represented the MLBPA before U.S. District Judge Sonia Sotomayor, now a Supreme Court justice.

Cohen mediated during the 2011 NFL lockout, helping bridge the gap between the owners and players, and ultimately a resolution was reached and the NFL season started on time. He also worked on owner-union disputes in Major League Soccer, the Metropolitan Opera and its musicians, the FAA’s dispute with Air Traffic Controllers and the American Red Cross and its unions. The NHL credits Cohen for helping prevent a complete cancellation of its 2004-05 season.

With Cohen sitting in the middle of the negotiating table, the NBA labor talks lasted 16 hours on Tuesday and nearly nine hours on Wednesday. Commissioner David Stern and league officials will meet again with NBA union president Derek Fisher and union executive director Billy Hunter on Thursday in New York.

Cohen ordered both sides to refrain from making any comments about the negotiations to the media, and so far both sides have declined to speak to reporters who, after nearly 25 hours of waiting, will have to brave through another marathon waiting session on Thursday. Make sure to bring your lunch ladies and gents because it could be another all-day affair.

Yahoo! Sports writer Adrian Wojnarowski wrote on Wednesday that some progress was made on the 50-50 revenue split in terms of basketball related income (BRI). TNT’s David Aldridge won’t speculate on what transpired during the meetings, but noted that having the two sides meet again Thursday can’t be a bad thing.

Wednesday was the 111th day of the lockout. Stern wiped out the first two weeks of the season – exactly 100 games – last week and vows to eliminate more regular-season games if there is no significant progress made this week. The cancellations marked the NBA’s first work stoppage since the 1998-99 season was reduced to 50 games.

If Cohen can somehow convince the owners and players that they can each profit from this new deal, then we may have a 2011-12 NBA season. If not, then it will be a very, very cold winter.