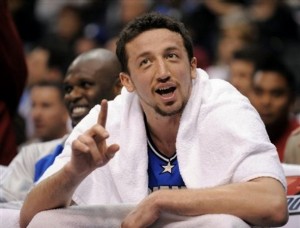 On a day when the Los Angeles Lakers and the Boston Celtics, the two marquee franchises of the league, were pushed to a Game 7, the player who came up huge was not named Kobe Bryant, Ron Artest, Paul Pierce or Dwight Howard.

When the Orlando Magic needed someone to turn the lights out at TD Banknorth Garden in Boston, Coach Stan Van Gundy – who has been heaviliy criticized for losing Game 5 to the Celtics – did not call on Howard’s number or Rashard Lewis’ number. Instead, Van Gundy put the ball in the hands of Hedo Turkoglu.

Turkoglu scored 25 points, making 4-of-5 threes, grabbed five rebounds and had a career-playoff high 12 assists to lead Orlando to a 101-82 victory in Game 7 and ended Boston’s reign as NBA champions. When the Celtics made a push in the fourth quarter to close the gap, similar to what they did in Game 5, Turkoglu made sure history was not going to repeat itself.

“The thing that I probably liked the most about it is, through a good part of the second half. It looked very, very similar to Game 5. But we looked we had learned from it and we continued to play, and Turk was outstanding down the stretch,” Van Gundy said.

Turkoglu, one of the best fourth-quarter players in the NBA, made nine of 12 shots from the field Sunday night in 36 minutes. Last year, he hit a 3-pointer at the buzzer to defeat the Celtics during a regular season game in Orlando.

Howard was solid (12 points and 16 rebounds) and so was Lewis (19 points). But make no mistake about it, the Magic was able to overcome Boston’s fourth-quarter comeback and earned a trip to the Eastern Conference finals because of Turkoglu. Playing point forward, the 6-foot-10 Turkoglu not only made the big shots but he also created shots for his teammates. The Celtics lost a playoff series for the first time after leading 3-2.

They call Turkoglu the Michael Jordan of Turkey. After his clutch performance in Game 7 at the new Boston Garden, they might start calling him Hero Turkoglu.