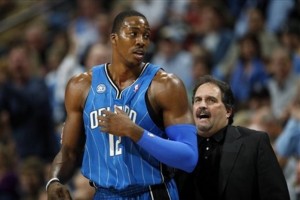 Dwight Howard is showing his age in these NBA playoffs. In the first round, he threw a malicious elbow to the head of Philadelphia’s Samuel Dalembert that resulted in a one-game suspension. Then in Game 5 against the Boston Celtics, the 23-year-old All-Star center threw Boston point guard Rajon Rondo to the floor out of frustration and later threw his coach under the bus.

The Magic pulled a disappearing act in the final six minutes of Game 5 in Boston and allowed the Celtics to rally and outscore them, 17-3, late in the fourth quarter. The Magic’s inability to close cost them the game, as the Celtics won 92-88, and it most likely cost them the series.

After the game, a defeated and disappointed Howard complained about not getting enough touches on offense and blamed Coach Stan Van Gundy for failing to put the correct lineup on the court.

“The coaches have to recognize what’s working on the floor. Stick to it. Even if it’s half your starters on the floor. Not just the guys you have put the most trust in. You have to have trust in everybody,” Howard said.

“The reason why we were winning is because we moved the ball, we ran, got easy shots. Our coach has to recognize when he has a certain group out there and they are getting the job done, we have to leave those guys on the floor. We are going to make mistakes, but I think you have to go with what works.”

Then, Howard added more fuel to the fire by praising Celtics Coach Doc Rivers. “Their coach left the guys on the court who got the job done,” Howard said. “That’s what championship teams do.”

Howard finished with 12 points on 5-of-10 shots from the field and 2-of-3 from the line. He grabbed 17 rebounds but failed to block a shot for only the second time in the series.

“I would just say it’s tough to win all season when you play inside-out with people who got you off to a good season. I think I’m capable of scoring in the post,” said Howard, who was outscored by Glen “Big Baby” Davis, 22-12. Howard made one basket in the fourth quarter.

“I don’t’ want to say it’s all about offense. But when you have a dominant player, let him be dominant,” Howard said. “I have to do it defensively where I have to be more aggressive and offensively I have to get the ball. I don’t think you are going to win a lot of games when your post player only gets 10 shots.

“It’s tough to get yourself going and get a lot of shots without a lot of touches. We have to do a better job with that.”

Van Gundy said the Magic has no one to blame but themselves for playing not to lose at the end.

“We just quit playing,” Van Gundy said. “We looked like we were trying to run the clock out, walking the ball up the floor, playing halfcourt. It’s not the way we wanted to play it.”