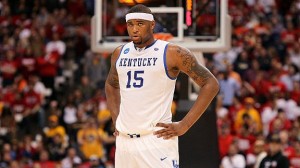 Kentucky center DeMarcus Cousins will be a force to be reckoned with the Sacramento Kings. (GETTY IMAGES)

When it comes to evaluating basketball talent, there are few in the NBA who are better than Geoff Petrie. The Sacramento Kings’ president of basketball operations was responsible for drafting Peja Stojakovic, Hedo Turkoglu, Gerald Wallace, Jason Williams, Kevin Martin and 2010 NBA Rookie of the Year Tyreke Evans.

Petrie may have picked up another gem in this year’s draft in No. 5 overall pick DeMarcus Cousins, who could be the next Moses Malone – a bigger and more tattooed version. For those who don’t know Moses Malone, shame on you. He was one of the original basketball beasts, a three-time NBA MVP and named one of the 50 Greatest Players.

Malone wore an intimidating scowl when he stepped on the court and played with a brick on his shoulder. Cousins is cut from the same mold. He walks into the arena as if his someone had just stolen his bike. Cousins possesses a little nasty streak and, just like Malone, almost relishes physical contact.

The 6-foot-11 center out of the University of Kentucky has been beastly so far in the 2010 NBA Summer League in Las Vegas, and his supposed attitude problem has been nonexistent so far. In fact, the Kings’ summer league coaches have been raving about Cousins’ work ethic and has showed some outstanding leadership skills, something that was a big question mark during pre-day workouts and a big reason why Cousins dropped to No. 5 in the draft. Otherwise, if you base it on talent alone, Cousins was arguably the second-best player in the draft behind John Wall, his teammate at Kentucky.

The 19-year-old from Mobile, Ala., attacks the boards like Malone. He’s not a quick leaper but knows how to use his body and rebounds extremely well in traffic. And just like Moses, Cousins has a great knack for getting to the free-throw line.

“He’s a very intelligent player,” Kings coach Paul Westphal said about his young big man. “He’s very agile, he’s got quick feet and he knows where the players are around him. And he’s a great rebounder. He’s going to be an outstanding player.” 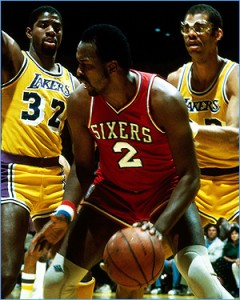 Moses Malone was the MVP of the 1983 NBA Finals against the L.A. Lakers. (NBAE/GETTY IMAGES)

There are two things you can’t teach: Speed and size.

Wall has the speed and Cousins has the size.

You can’t criticize Washington for taking Wall, who is an absolute blur on the court, but the three teams who passed on Cousins – Philadelphia, New Jersey and Minnesota – will ultimately regret their decisions. While Evan Turner, Derrick Favors and Greg Monroe struggle to adjust to the NBA game, Cousins has assimilated very well.

“Oh, we’re real happy with him,” Westphal said. “Nothing about his stats or anything else, what impresses me is he really knows how to play. He really has a great feel for a 19-year-old, usually that’s one of the last things big guys learn is the feel for the game.

Westphal says the arrival of Cousins expands Sacramento’s options in the frontcourt. If Cousins plays center he could play alongside up-and-coming power forward Jason Thompson, and if slides to the power forward spot he could pair up with 7-footer Samuel Dalembert, Sacramento’s newest acquisition.

Add 7-foot rookie Hassan Whiteside and 6-9 Carl Landry and all of a sudden the Kings are now equipped to handle division rival L.A. Lakers, who boasts 7-footers Pau Gasol and Andrew Bynum in their starting lineup and 6-10 Lamar Odom off the bench.

“Now we’ll be able to protect the paint a lot better,” Westphal said.

In Cousins’ debut in the Las Vegas NBA summer league on Monday, he finished with 14 points and 10 rebounds in just over 26 minutes of work in the Kings’ 97-68 blowout of the Detroit Pistons at Cox Pavilion. He thoroughly outplayed fellow rookie Greg Monroe, who simply couldn’t handle Cousins in the low block.

Cousins followed that solid performance with another double-double, scoring 19 points and grabbing 12 rebounds against the Lakers on Tuesday at Thomas & Mack Center. Matched up against Lakers second-round pick Derrick Caracter, who has played well this summer, for much of the game Cousins displayed an array of low-post moves, a soft touch near the basket, and a face-up game knocking down mid-range jump shots. He only shot 8-for-20 from the field, but skill set was obvious.

And he also squashed any reports that he was overweight. He was listed at 292 pounds during the draft, but he might already shed a few pounds and looked fit enough to dominate. He showed his athletic ability when he blocked Caracter’s shot with his left hand, hustled down the court, bowled over two Lakers and flipped a one-handed shot for a basket.

Cousins is already ahead of the curve when it comes to drawing double teams and kicking the ball out to teammates. Early in the first quarter against the Lakers, Cousins drew a double team and dropped off a nice no-look pass to a cutting Omri Casspi, who finished the play with a dunk.

It probably won’t be the last time Cousins and Casspi will be hooking up for a dunk.

Last year, Petrie and the Kings landed two gems in the draft in Evans and Casspi. With Evans, Casspi and Cousins, Sacramento now has its own version of The Three Kings and could be serious challengers to the Lakers in the Western Conference. Just like old times.

And just like Moses, the Kings are hoping Cousins can lead them to the Promised Land.