Boston’s three-headed monster, the one that has dominated the sporting landscape for the better part of this decade, is close to becoming extinct.

Last summer, the Red Sox stumbled out of the American League pennant chase and was forced to watch the hated New York Yankees win the World Series.

Then last month, the Patriots were eliminated by the Baltimore Ravens in the Wild-Card round of the NFL playoffs and will have to watch the Indianapolis Colts, their AFC nemesis, play in the Super Bowl.

Now, the Celtics are waving the white towel faster than you could say “M.L. Carr!” losing 11 of their last 18 games since Christmas Day and recently got stung on national TV by The Black Mamba and the rival Los Angeles Lakers.

Loyal fans in Beantown still claim that the window of opportunity to win championships is still open for their beloved teams. However, the one opponent you can’t overcome is Father Time and the Red Sox, Patriots and Celtics have all fallen victim to his wrath. 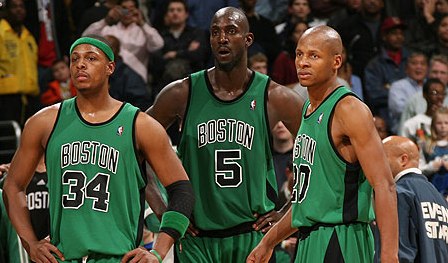 The Celtics were one of the heavy favorites to win the Larry O’Brien Trophy when the season started, opening as a 2-1 pick to advance through the Eastern Conference playoffs and 4-1 to win the NBA championship according to BetUS.com.

But lately, the 2008 champs have begun to show some wear and tear, losing six of its last 10 games and, in a four-day span last week, the Celtics suffered a regular-season sweep by the Hawks, blew a double-digit lead in the fourth quarter against the Magic and lost at home by a point to the Lakers.

And to complete the cycle of bad luck, All-Star forward Paul Pierce, strained his left ankle against the Wizards Monday and is now day-to-day.

“Boston remains one of the most overvalued teams in the league,” said Covers.com experts Sean Murphy, who dropped Boston two slots from No. 6 to No. 8 in his latest NBA power rankings.

“They have done a fairly good job taking care of business against weaker opponents, but when stepping up in class, they’ve been awful,” says Murphy. “Those are the spots you really want to focus on if you plan on fading the Celtics.”

Head coach Doc Rivers said that his aging team needs to play with a sense of urgency. But if Rivers is pressing on the gas pedal now and building a ton of mileage in February, the Celtics could be running on empty come May and June.

“I can’t say that I see them as a championship contender this season,” Murphy said. “In my opinion there are at least three teams better than them in the East: the Cavs, Magic, and Hawks. Even the Raptors are making a push, and although they’ve struggled against the Celtics this season put them in a seven-game series and I think they would give them a run.”

Before the Celtics can begin to look ahead to playoff matchups they have some serious health issues that need to be addressed, mainly the status of Kevin Garnett. The 33-year-old All-Star forward has been in and out of the lineup the past two seasons and his troublesome right knee is about as stable as the U.S. economy.

Garnett is without question the linchpin that holds the Celtics title hopes. When he’s healthy, the Celtics have a championship swagger. But when he’s hobbling like Willis Reed, Boston becomes very vulnerable.

“I think this team really lost its momentum at the end of last season when KG went down and missed the playoffs,” Murphy explained. “Everything came together for them two years ago, and now they’re having a really tough time getting back their mojo, so to speak.”

Garnett has amassed more than 40,000 minutes during his 15-year NBA career. That’s more minutes than what Larry Bird, Charles Barkley, Dominique Wilkins and David Robinson each logged during their entire careers.

“KG has been around for a long time, and while he is still an elite player, I don’t think we’re ever going to see him play at the level he did earlier in his career,” Murphy said.

Ray Allen, the third cog of Boston’s Big Three, is struggling to match last season’s numbers. Through 46 games, the 34-year-old shooting guard is averaging 15.7 points per game (the lowest since his rookie year) and is making just 34 percent of his 3-point shots, the worst of his 14-year career.

Allen is a free agent after this season and, according to Murphy, there’s a good chance the Celtics are not going to bring him back next season.

Could this be the last time we see Boston’s Big Three wearing the Celtics uniform?

“They’ve already gotten their rings and I think you can clearly see that this is the beginning of the end for the star trio in Boston,” Murphy said.