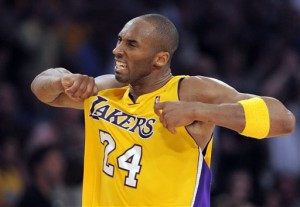 By winning his fourth NBA championship and his first Finals MVP trophy, Kobe Bryant earned his MA in being a team leader. (ASSOCIATED PRESS)

Winning an NBA championship is kind of like graduation. You work all year to accumulate points and, once it’s done, you get to enjoy a big celebration in June.

On June 14, 2009, Kobe Bryant graduated from all-star to uber star. He scored an A-plus on his NBA report card and finally completed this master’s degree in leadership.

Being named most valuable player of the NBA Finals signifies that you are the best player in the world. When Kobe Bryant was handed the Bill Russell MVP trophy on Sunday night after leading the Los Angeles Lakers to an NBA championship, he officially became a Jedi Master – one who can force his will on his own team as well as his opponent. If LeBron James is the MVP of the NBA, then Bryant is the MVP of a galaxy far, far away.

“He is the guy that LeBron and all those other guys are chasing. He’s Machiavelli. He’s a throwback,” former NBA coach Jeff Van Gundy said of Bryant while comparing him to the great Italian philosopher. Bryant averaged 32 points per game, six rebounds and seven assists in the five-game series against the Orlando Magic en route to claiming his first Finals MVP and his fourth NBA championship ring.

“MVP. Championship. The legacy continues. This guy now, in my opinion, is in the top 10 players of all time. He’s No. 10 in my book,” TNT’s Kenny Smith said about Bryant, who is widely regarded as the best closer in the game.

Though he won three championships from 2000-02, this year’s title resonates more with Bryant, a player who balances being the most beloved player in the league and its most hated villain. He entered the league as a cocky and sometimes irritating 18-year-old know-it-all and now, at 30 years old, his unparalleled swagger is viewed as intimidating.

Bryant recently admitted he is a much better all-round player now and went as far as saying he had a better year in 2009 than 2008 – and ’08 was his MVP season. Winning a fourth NBA championship definitely cemented Bryant’s place in NBA history. He now has his championship without Shaquille O’Neal, proving to critics he can lead a team to a championship as the main Alpha Male.

“It was just annoying. It was like Chinese water torture,” Bryant said of the chatter that he couldn’t win a title without Shaq. “I would cringe every time. I was just like, it’s a challenge I’m just going to have to accept because there’s no way I’m going to argue it. You can say it until you’re blue in the face and rationalize it until you’re blue in the face, but it’s not going anywhere until you do something about it.

“I think we as a team answered the call because they understood the challenge that I had, and we all embraced it.”

O’Neal posted a congratulatory message on his Twitter page following the game: “Congratulations kobe, u deserve it,” O’Neal wrote. “You played great. Enjoy it my man enjoy it.”

It took Bryant 13 years to finally shed the selfish moniker he’s been unceremoniously branded with. He dropped the hot dog, mustard and the relish off his game and developed a healthy diet of highlight-free moves. Although he still showcases a spectacular move once in a while, for the most part he has become more efficient on offense and defense. Because he’s a little bit older and does not jump as high, Bryant has ditched the fancy crossover dribbles and the ill-advised pull-up 3-pointers in favor of turn-around jumpers in the post and more high-percentage mid-range jump shots.

The biggest improvement in Bryant’s game is his passing. He is now willing to share the ball with his teammates, a part of his game that he really struggled with during the early part of his career. There was a time when he led a fastbreak and no one ran with him. He was the lone wolf of the pack. Now, when he leads a fastbreak, the pack is running with him. 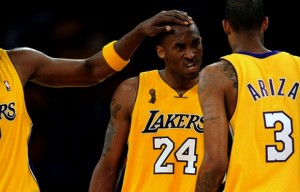 When Kobe Bryant got his teammates involved, the Lakers became world champions.

His coach of eight years, Phil Jackson, has witnessed Bryant’s growth as a player and as a person.

“We had a game in Toronto and he had gotten hooked up with Vince Carter in the middle of a fourth quarter, and they kinda exchanged baskets and I thought it took our team out of our team play. The game was much harder than it should have been,” Jackson recalled. “So I talked to him a little bit about leadership and about his ability to be a leader and he said, ‘Yeah, I’m ready to be a captain right now.’ And I said, ‘But no one is ready to follow you.

“But he was 22 at the time. He was a young guy,” Jackson continued. “In those eight years that ensued from that period, he’s learned how to become a leader in a way in which people want to follow him. I think that’s really important for him to learn that. He knew that he had to give to get [something] in return. He’s become a giver rather than just a guy who’s a demanding leader. It’s been great to watch.”

Bryant’s willingness to share the ball was evident in Game 4 against the Magic. He set up Pau Gasol’s dunk with 32 seconds left with a whirling-derbish move ala Earl Monroe. With the Lakers down 87-84 with 10 seconds left, the Magic double-teamed Bryant and, without hesitation, he passed the ball to Trevor Ariza and started a mini-fastbreak, culminating in a 3-pointer by Derek Fisher to send the game into overtime.

In overtime, Kobe’s recognition of a double team resulted in a wide-open 3-pointer for Fisher at the top of the arc for what proved to be the game-winning shot of Game 4 and the defining moment of the ’09 Finals. Those two plays were clear indications that Kobe Bryant has grown into his role as the most complete player in the world. He no longer needs to be told that. He knows it.

“This is one bad man,” former NBA guard and current ABC/ESPN analyst Mark Jackson said. “You’re talking about a complete basketball player. I don’t really think you appreciate how great this guy is. I learned as a broadcaster you don’t want to throw around the word ‘great.’ I’m gonna go out on a limb and say, ‘This guy is great.’ As good as we’ve seen at the two-guard position.”

When Bryant realized that he can’t win on his own, no matter how hard he tried, he evolved as a player. His single-mindedness and incredible drive, which is both a curse and a gift, now permeates to the rest of his team. He has become a better teammate. He still has some venom when he rips into his guys, but he has done it less and less.

The transformation began in 2007-08 when Bryant won MVP during the regular season. The arrival of Gasol gave Bryant the much-needed support he has craved for since O’Neal left town in 2004. With Gasol playing the No. 2 scoring option and Fisher as wingman, Bryant took HIS new-look Lakers to the NBA Finals in ’08 but fell short against the Boston Celtics. Instead of having another meltdown during the offseason, Bryant went back to the lab and helped HIS teammates get stronger – physically and mentally. Bryant knew he needed to build HIS team back up – one pass and one shot at a time.

“Losing in the Finals last year brought us closer together,” Fisher said. “This team is closer because of the combination of guys in terms of their ages and where they’re at in their careers. With these guys, everybody being early to mid-20s, there was a willingness to learn and be around me, to be around Kobe, and be around people that they can learn from.”

With Bryant as their undeniable leader and captain, the Lakers knocked off every Western Conference foe in surgical fashion and slapped the exclamation point with a victory over the Magic in the Finals.

Having been to the top in Stage 1 of his career, Bryant has talked about climbing the mountain top again. With Stage 2 well underway, he is more refined and building a legacy that could land him above his idol, Michael Jordan. “I just want to be the best – simple and plain. But to be the best, you have to win. That is what drives me,” Bryant said.