They were polar opposites but found a common ground that became the foundation of their friendship. They lifted college basketball to new heights and rekindled the Lakers-Celtics rivalry in the NBA. They helped save the NBA from a dreadful decade in the 1970s and were at the forefront of the league’s burgeoning popularity in 1980s.

Earvin “Magic” Johnson and Larry Bird are about as different as they come off the court, but on the court they both valued the bottom line – winning.

Johnson is a happy-go-lucky, extrovert who is part basketball player and part movie star with a nickname that perfectly fits his alter ego. Bird is a shy, introverted farm boy from Indiana who guards his privacy. And, oh by the way, Johnson was black and Bird was white, creating a racial division from West to East. 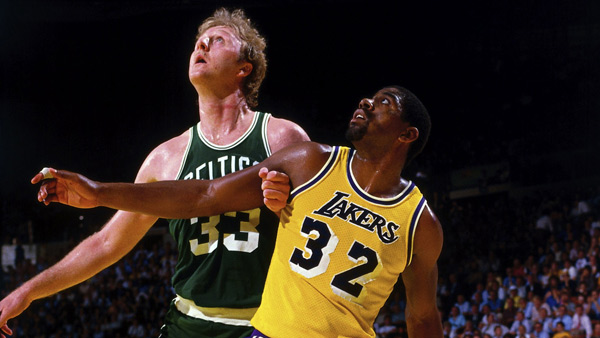 Bird openly discussed about his feelings the time when his father, Joe, committed suicide. The show also uncovered the real reason why Bird began having back issues later in his career, and Bird said he should have retired after the 1988-89 season.

Johnson credited Bird winning rookie of the year in 1980 as his main motivation to win Game 6 of the NBA Finals against the 76ers. Magic also revealed a very emotional phone call from his chief rival the day he told the world he was HIV positive. Johnson said, while fighting back tears, he was eternally grateful that Bird reached out to me and was genuinely concerned for his well-being. “That’s when you know who your friends are,” Johnson said.

The Magic-and-Bird rivalry started in the 1979 NCAA championship won by Johnson, and to this day Bird says is “the worst loss he’s ever had.” The rivalry continued in the NBA as Bird went to the Celtics while Johnson was drafted by the Lakers. Bird’s Boston’s teams were considered lunchpail guys, while Johnson’s L.A. teams were tabbed as “Showtime.”

It was a matchup made from basketball heaven and may never happen again.