Orlando coach Stan Van Gundy has exhausted every option in this series, and still finds his team down 0-2. (NBAE/GETTY IMAGES)

Game. Set. Match. The NBA Finals are officially over. The Los Angeles Lakers absorbed the Orlando Magic’s best shot and still pulled out a 101-96 overtime victory in Game 2 of the NBA Finals to take a commanding 2-0 series lead.

The percentages do not favor Orlando as only three teams in the history of the league have been able to climb out of an 0-2 hole in the Finals: The 1969 Boston Celtics, the 1977 Portland Trail Blazers and the 2006 Miami Heat. The ’06 Heat is also one of just three teams to sweep the middle three games (the Detroit Pistons did in 2004 and the Lakers pulled it off in 2001), something Orlando needs to do just to stay afloat in this series.

So, to say that the Magic is in deep trouble is the understatement of the season. They basically have one foot in the grave, and Coach Stan Van Gundy appears to be running out of options.

The Magic had chances to win, but Van Gundy pointed out the 41% shooting and the 20 turnovers ultimately doomed them. The Magic guards shot 6-for-26 for the game and center Dwight Howard was responsible for seven of Orlando’s 20 turnovers, another reason to call him Blankman instead of Superman despite scoring 16 points and grabbing 17 rebounds. To avoid a Lakers sweep, Howard needs to play like a real superhero and stop looking at the referees for help.

“Yeah, I was frustrated,” Howard said. “Being a leader of my team, my teammates cannot see me frustrated. I gotta played through all the different situations and learn from them.” 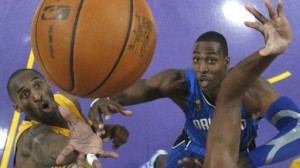 After two games, Kobe Bryant is playing like a Finals MVP and Dwight Howard has been very ordinary.

Orlando played much of the second half with Turkoglu at the point, benching Jameer Nelson and Rafer Alston. After his brief shining moment in the second quarter of Game 1, Nelson has not been much of a factor in the Finals, which was to be expect since he has not played since February. Alston, however, does not have an excuse. Skip to My Lou has been skipping these past two games. He was 2-for-9 for six points in the Game 1 and followed that with a 1-for-8 effort in Game 2 and scored a measly four points.

“I thought Rafer was playing well. They’re just leaving him open on every post up and couldn’t get the ball in the basket,” said Van Gundy, whose team was 33-for-79 from the field and got just 17 bench points. L.A.’s Lamar Odom (who scored 19 points) outscored Orlando’s bench by himself.

“We were searching for somebody to make a shot. Obviously, we didn’t find anybody,” Van Gundy continued. “I thought, for the most part, L.A.’s defense was good and I thought our guards had very good open looks. We just couldn’t knock anything down. I thought they got plenty of shots. I don’t think it was much trouble getting our guards shots. They’re not guarding them. They’re only guarding three guys.”

The Lakers mainly focused their defense on Howard, Turkoglu and Lewis and took their chances on the “other” guys. J.J. Redick was 2-for-9, Mikael Pietrus was 1-for-3 and Nelson was 1-for-3. When asked how he can fix the problem, Van Gundy answered: “I don’t have any idea on how to fix that.”

The Magic player who feels worse than Alston is rookie guard Courtney Lee, who missed a layup with 0.6 left in regulation that would won the game for Orlando. The missed opportunity ended up biting the Magic as the Lakers outscored them 13-8 in overtime.

“We missed it. I don’t know what else to say,” Van Gundy said. “We executed well, Hedo made a great pass and we missed it.”

When a reporter commented on the fact that Van Gundy has done everything he can to win the game, the Magic coach replied: “I wouldn’t say that. We win and lose together. It’s not me doing everything and our players not getting it done. All we did was try a lot of stuff today.”

All Van Gundy and his staff can do now is avoid getting swept.