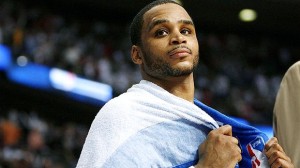 Jameer Nelson's decision to play in The Finals has hurt the Magic rather than help them.

A 3-1 deficit in The NBA Finals. It is staring the Orlando Magic in the face as it tries to figure out what went wrong in Game 4, a game that saw the Magic blow a 12-point halftime lead, turn the ball over 19 times and miss 15 free throws.

But the biggest reason why Orlando is on the brink of elimination is because of the presence of Jameer Nelson. In hindsight, the decision to activate him for the NBA Finals was probably the wrong one. Instead of providing a shot in the arm for the Magic, Nelson has become a detriment to team chemistry and his blown defensive assignment at the end of regulation will go down as one of the all-time blunders.

Nelson, the All-Star guard who has played in four games since injuring his right shoulder in February, inexplicably allowed Derek Fisher too much space to shoot a 3-pointer that tied the game at 87 with 4.6 seconds left and forced overtime, where Fisher hit another three to seal a 99-91 Lakers victory.

“Obviously, we didn’t want to give up a three. I think I let Fisher get into rhythm and he shot a good shot. I could have pushed up a little more,” Nelson said of Fisher’s first 3-pointer of the game after missing his previous five attempts. Fisher’s second 3-pointer came in overtime, which also involved Nelson.

“I got elbowed,” Nelson said. “I went to go double Kobe and got elbowed. The explanation I got was the man had the ball so [the referee] can’t call the elbow,” Nelson said on the play where Bryant’s right elbow knocked him to the floor and allowed Fisher an open look at the top of the 3-point arc that made it 94-91 with 30 seconds left in OT.

Mickael Pietrus, one of the few Magic players who actually delivered in the clutch in Game 4 and did an admirable job of slowing down Kobe Bryant, says the game began slipping away in the third quarter when the Lakers erased a 12-point halftime deficit by outscoring Orlando, 30-14, in the third.

“I think we didn’t play well at the end of the third quarter and the beginning of the fourth quarter. We started panicking a little bit and lost a lot on turnovers,” Pietrus said.

Did Pietrus just say the Magic panicked? Somewhere out in Phoenix, Shaquille O’Neal is laughing out loud as he Twitters.

Magic coach Stan Van Gundy said the end of regulation will “haunt him forever,” but his nightmare was a self-inflicted psychological scar. His decision to play Nelson in the fourth quarter and overtime will turn out to be more damaging than any missed free throw or careless turnover.

Van Gundy reasoned that he gave Nelson more minutes in the second half because Orlando was struggling on offense and Alston would have had a difficult time getting in rhythm after sitting for a long time.

“I thought we had a really, really bad third quarter,” Van Gundy explained. “It wasn’t so much one guy over the other, it was just we had a unit in the fourth that was playing real well and then you get down to the point where Rafer hasn’t played in 10 or 12 minutes. I thought it would be to bring him back. Jameer wasn’t doing a whole lot, but it also wasn’t hurting us at all.”

Alston had 11 points on 5-for-13 shooting, two assists and one turnover in 27 minutes. Nelson had two points, three turnovers and three assists in 26 minutes.

“I was shocked. I was shocked,” Alston told the Associated Press of his Van Gundy’s decision to bench him. “It’s tough. You’re thinking Coach will come back to you. The first two games I could understand, but again we were right there to win the game. As a player you would like to have your number called.”

Van Gundy dismissed the idea that Orlando’s lack of experience was not a factor in the Magic being down 3-1 in the series. Instead, he pointed out some regrettable mistakes that will stick with them all summer and maybe beyond that.

Dwight Howard tried to defend his teammate and close friend, saying it was more Fisher than Nelson’s decision not to contest the shot that killed the Magic in Game 4.

“We tried to take that away, but he just made a tough shot,” Howard said. “We just rushed a little bit. But there’s nothing we can do about it right now.”

Despite Nelson’s botched assignment on defense and all the turnovers, Orlando still had a chance to secure the victory with 11 seconds left when Howard was fouled by Bryant and sent him to the line with the Magic ahead 87-84. All Howard needed to do was sink one free throw the outcome would have been different.

“I just missed them. I’ve been working my free throws, I just didn’t make them,” said Howard, who was 6-for-14 from the line and his two huge misses with 11 seconds left in the fourth quarter allowed the Lakers a chance to tie game.

“It wasn’t just me, it was all of us,” Howard said of Orlando’s 22-for-37 free throw shooting. “But there is no reason to have any doubts right now. Never stop fighting, never stop believing. We have to bounce back. There’s no need to hang our heads.”

Howard’s monster game – 16 points, 21 rebounds and a Finals record nine blocked shots – was overshadowed by his seven turnovers and his eight missed foul shots. Hedo Turkoglu led the Magic with 25 points, but he was 8-for-13 from the line. Rashard Lewis struggled all night and finished with just six points on 2-for-10 shooting.

Should the Magic somehow win Game 5, it would only prolong the inevitable. The Lakers are now in complete control of the series and the Magic players, as well as Coach Van Gundy, have no one to blame but themselves.