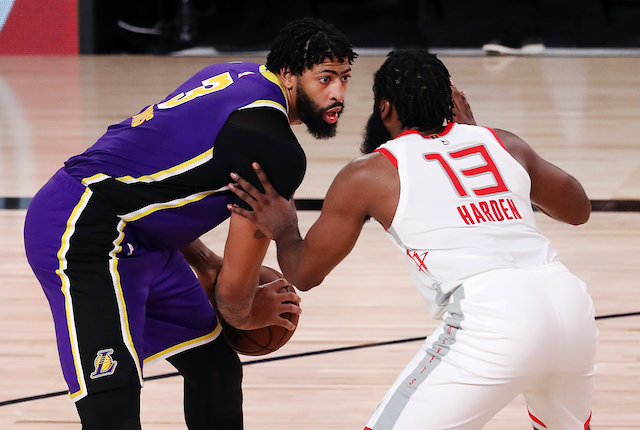 The Houston Rockets were eliminated from the NBA playoff bubble, and it is safe to say the microball experiment was an epic failure.

The Los Angeles Lakers, a team loaded with length and size, bounced the undersized Rockets in the Western Conference semifinals. The five-game series revealed what most basketball pundits wondered out loud. Could the Rockets make enough 3-pointers to make up for their lack of size? The answer was an emphatic “no.”

The second-round exit triggered what could be a very difficult offseason for the Rockets. Just hours after the playoff elimination, Mike D’Antoni reportedly informed the franchise that he was not returning. D’Antoni basically beat the Rockets to the punch. He knew what was coming. He went into this season without a contract extension as the Rockets brass operated on a wait-and-see approach before committing to D’Antoni for next season and beyond. What they saw was the Rockets have reached their ceiling under D’Antoni, and it’s time for a major strategy shift and revamp a roster built around two guards each making $38 million per season.

When the Rockets traded center Clint Capela on Feb. 4, 2020, as part of a massive four-team, 12-player transaction, D’Antoni and his staff went all in on small ball.

In the Capela deal, the Rockets acquired veteran shooter Robert Covington. The analytical thinking behind the move was the 6-foot-7 swingman provides D’Antoni another 3-pointer shooter to space the floor and solid perimeter defender who can switch on guards off pick-and-roll or pick-and-pop action. The Rockets also felt by having another long-range shooter on the court, it will create more space for iso-ball masters James Harden and Russell Westbrook more driving lanes.

Those are what the analytics showed. What the analytics didn’t show was small ball only works when you have a non-traditional center who can play center. In other words, you need a special 5 man who can anchor your defense and space the floor on offense. Think Draymond Green.

Draymond allowed the Golden State Warriors to play 5 “smalls” because even though he was undersized — listed at a generous 6-6 — he played much bigger than his actual size. Green is a tenacious rebounder with an uncanny ability to guard perimeters players, making it easier for the Warriors to switch everything on screens, and he’s the Warriors’ primary playmaker on offense. A point-center if you need to tag him. Green’s unique ability to handle the ball out in the perimeter gives the Warriors the flexibility on offense and play Steph Curry and Klay Thompson off the ball.

It’s also erroneous to describe the Warriors as a “small” team. Seven-footer Andrew Bogut was the starting center on their 2015 championship team, and he was widely regarded around the league as one of the best post defenders. When the Dubs do go their smaller lineup, they have the length and athleticism to switch everything on defense. Andre Iguodala (6-8), Thompson (6-7) and Green (6-6) are worthy candidates for the all-defensive teams. Curry (6-3) is the shortest Dubs starter but he is among the league leaders in steals. After losing to LeBron James and the Cavaliers in the 2016 NBA Finals, the Warriors stunned the basketball world by acquiring Kevin Durant. Durant, a 6-10 forward who can play all five positions, made the Warriors nearly impossible guard and their defense got even better because Durant covered so much ground with his insane wingspan.

There were a few exceptions such as Michael Jordan’s Bulls, Isiah Thomas’ Pistons, LeBron’s Heat squad and Steph Curry’s Warriors. But even those teams had good size up front.

The Bad Boy Pistons in the early ’90s may not have had dominant big men but they had several bruisers in Bill Laimbeer, Rick Mahorn and James Edwards. Jordan’s Bulls didn’t have All-Star centers, but they had competent 7-footers who clogged up the paint in Bill Cartwright, Luc Longley, Will Perdue, Bill Wennington and Brian Williams.

During Miami’s championship run with LeBron and Dwyane Wade, the Heat’s best lineup was when LeBron, Wade, Mario Chalmers, Shane Battier and Chris Bosh were on the floor. Battier and LeBron could play either forward positions, and Bosh — who made All-Star teams in Toronto as a power forward — anchors the team as the center.

This season the Heat went back to the microball formula by moving away from traditional big Hassan Whiteside and handing the keys to modern-day big Bam Adebayo. Adebayo, a natural power forward, brings the same skillset as Draymond. Bam can anchor the Heat defense, rebound, switch on guards and be a playmaker on offense.

The Rockets were banking on P.J. Tucker to be their Draymond Green or Bam Adebayo. But Tucker — who stands 6-5 with shoes on — isn’t tall or athletic enough to be the backline of a defense and isn’t skilled enough to be a playmaker on offense. Tucker is a 3-and-D guy who can occasionally defend bigs in short bursts. He can’t do it for an entire game. Tucker might be a good center overseas like in professional leagues in the Philippines or Japan, but not in the National Basketball Association.

Houston is at its best when Harden, Westbrook, Eric Gordon, Covington and Tucker are on the court, with Covington being the tallest guy at 6-7. Not surprisingly, the Rockets’ best lineup didn’t match up well against the Lakers’ finishing lineup of LeBron (6-8), Anthony Davis (6-10), Kyle Kuzma (6-9), Danny Green (6-6) and Alex Caruso (6-5). Even when the Lakers “downsized” by inserting Markief Morris in favor of JaVale McGee in the starting lineup and moving Davis to center they were still significantly bigger than the Rockets. Davis and LeBron had their way with the Rockets in the paint. Davis dominated the boards in every game and often found himself doing the Mikan drill near the rim. For those who don’t know the Mikan drill, it’s when you stand under the basket and shoot layups with either hand.

As the series wore on, Davis — arguably the best big man in the league today — imposed his size and length on Tucker and the Rockets’ frontcourt. With exception of Game 1 when Houston matched L.A. board for board, the Lakers outrebounded the Rockets 186-117 in games 2, 3, 4 and 5. Game 1 was the only game the Rockets took from the Lakers.

Once the Lakers adjusted to what the Rockets were doing, it was a wrap. The 3-point shots were heavily contested and the driving lanes shrunk. Westbrook, who usually has his way against smaller guards in the paint, struggled against a swarming Lakers defense. Westbrook was met at the rim with plenty of resistance, mainly from LeBron, who spiked four or five Westbrook layups into the empty stands and let him know about it each and every time. The Rockets missed countless pointblank layups because they were seeing ghosts around the rim.

It’s back to the drawing board for the Rockets.