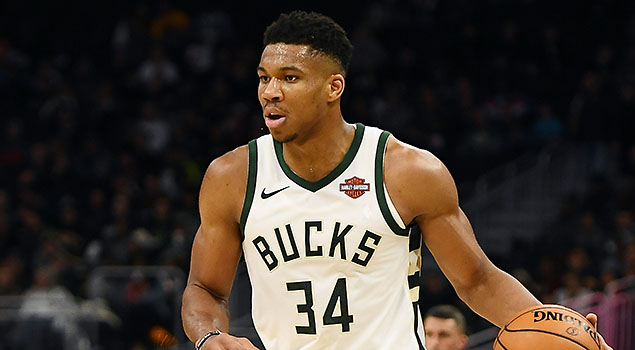 Giannis Antetokounmpo of the Milwaukee Bucks handles the ball during a game against the Minnesota Timberwolves at Fiserv Forum in Milwaukee. (Getty Images)

Giannis Antetokounmpo is well aware he’s far from being a finished product.

Sounds ridiculous to even suggest that the reigning NBA MVP, who averaged 27.7 points per game, 12.5 rebounds, 5.9 assists, shot 58 percent from the field and led his team to the best record in the Eastern Conference during the 2018-19 season, still has plenty of room for improvement. But that is the case with the 24-year-old Greek Freak, who is only scratching the surface of his prodigious talent.

“I always think that I can improve,” Giannis told NBA TV. “That’s the one thing I have been doing, and I’m gonna keep doing it. There are going to be times that I’m not going to improve anymore. But as long as I keep working hard, keep believing in myself, I think I will keep getting better.”

“I can tell you right off the top of my head five things I could do better,” he added. “I could shoot more threes, catch and shoot threes so I can help my teammates space the floor better. I could be able to playmake more. I could improve my handles. Make my handles more tight. There’s a lot of things I can improve.”

Milwaukee is among the favorites to win the NBA championship. But first things first. The Bucks need to learn from last year’s disappointing finish in the playoffs.

“We try to get better each day. We try to compete at practice and create a habit that can carry over to the game,” Giannis said. “We know teams are going to come and try to win games against us. But we gotta be ready. We gotta do what we did last year. Defend together. Move the ball offensively. If we keep doing that we’re gonna be fine.”

OneManFastBreak.net predicts the eight teams that’ll make the playoffs out of the Eastern Conference.

1-Milwaukee Bucks (60-22) – Giannis said losing in the conference finals “stinks.” The Bucks had the Toronto Raptors down 2-0 and could have gone up 3-0 in the series. But it didn’t happen. The Raptors rallied and won the next four games and captured the franchise’ first NBA championship. This season’s theme for Giannis and the Bucks is finish. They must finish the job, and they could have the squad to get over the hump. The addition of Wes Matthews gives them another wing 3-pointer shooter to go with Khris Middleton and Kyle Korver. The key is point guard Eric Bledsoe. Can Bledsoe play big when the Bucks need him most? That’s a question that won’t be answered until April.

2-Philadelphia 76ers (57-25) – The last time when saw Joel Embiid, he was crying as he left the court after a devastating loss in Game 7. Embiid’s raw emotion was telling. His desire to win is greater than we thought. Embiid will be highly motivated to push the Sixers deep in the playoffs. If you believe the videos on social media, Ben Simmons has a 3-point shot now. Simmons has been flashing his brand-new jumper during pickup games but we won’t know for sure how confident he is with his wetter until the regular season begins. Simmons’ growth as a shooter could be the leap the 76ers need to be able to move past the Bucks and advance to the franchise’s first NBA Finals since the Allen Iverson era.

3-Toronto Raptors (49-33) – The Raptors gave forward Pascal Siakam a huge vote of confidence by signing him to a four-year, $130 million max contract extension. The move signals that the Raptors believe Siakam, 25, can become the cornerstone of the franchise. He had a breakout season in 2018-19, averaging 16.9 points, 6.9 rebounds and 3.1 assists en route to winning the Most Improved Player award. His improvement on offense and defense were major reasons why the Raptors defeated Golden State in the NBA Finals. With Kawhi Leonard now with the L.A. Clippers, Siakam will have plenty of shots to prove he’s worth the money.

4-Boston Celtics (48-34) – The Celtics are hitting the reset button this season after the failed Kyrie Irving experiment. Kemba Walker was the team’s big free-agent acquisition and he’ll assume point guard duties for a squad in desperate need of a backcourt leader. Losing Al Horford to the 76ers will hurt more than most people think. Horford was the anchor of the C’s defense and spaced the floor on offense with his ability to pick and pop. Coach Brad Stevens is hoping forwards Jayson Tatum and Jaylen Brown can regain the magic they showed in the playoffs two years ago.

5-Miami Heat (47-35) – After barely missing the playoffs last season, the Heat are back with Jimmy Butler leading the way. Butler reportedly turned down a five-year, max contract offer from the 76ers to move to South Beach and become the new face of the Miami Heat as Dwyane Wade heads into retirement. Jimmy Buckets gives the Heat something they’ve sorely lacked the past couple of years — a bonafide All-Star wing who can close games.

6-Brooklyn Nets (46-36) – Nets fans will have to wait a year before they see Kevin Durant, who is recovering from a devastating Achilles tear. In the meantime, the Nets will lean on newly acquired point god Kyrie Irving along with some solid role players. Young big man Jarrett Allen showed a lot of promise as the team’s stretch 4, who can also play some center. Caris LeVert has the ability to create his own shot, while Joe Harris led the league in 3-point shooting percentage last season.

7-Orlando Magic (44-38) – The Magic were a playoff team a year ago, and this year they’ll be slightly better. Big man Nikola Vucevic agreed to stay with the team by signing a four-year, $100 million deal last June. Vucevic has been overlooked for much of his pro career, but stats show he’s a top-10 center. The 28-year-old center averaged 20.8 points and 12 rebounds last season, both career highs. The growth of the Magic depends on forward Aaron Gordon. If Gordon can make an All-Star leap, the Magic could challenge for homecourt advantage in the first round.

8-Indiana Pacers (43-39) – Indiana Pacers GM Kevin Pritchard expects star guard Victor Oladipo to be out of the lineup until at least December as he recovers from a ruptured quad. “I’m hopeful he’ll be back December or January,” Pritchard said. Oladipo suffered the injury in January and has been progressing slowly. Until Oladipo returns, it’s hard to give the Pacers a full evaluation. With Oladipo, the Pacers are a definite playoff squad. Without him, they’re struggling to stay above .500.