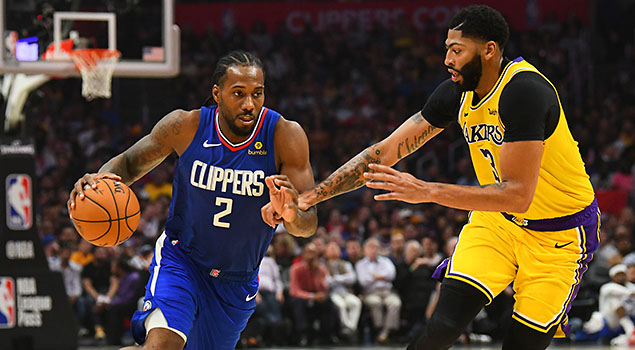 The biggest winner during the NBA offseason was the city of Los Angeles.

Staples Center will be the center of the basketball universe as we enter the 2019-20 NBA regular season because two of the best teams in the league will play 82 times in Downtown Los Angeles.

The pride of Riverside, Calif., Kawhi Leonard chose the glitz and glamour of Hollywood over the cold winters in Toronto (duh!) and he brought another Southern California native, Palmdale’s Paul George, with him. Leonard and George now form a formidable 1-2 punch as members of the L.A. Clippers. Add pitbull guard Patrick Beverley and super subs Lou Williams and Montrez Harrell in the mix and you have a team that is favored to capture the NBA title.

This could be the year the Clippers will finally be able to put up a real banner at Staples Center instead of those giant selfies that hung during the Lob City era.

“Everybody being high character. Sacrifice. Wanting to win. Determination. Knowledge. All that together. Just being on the floor, going out there as one unit. All trying to accomplish that ultimate goal. That’s what drives a championship team,” Leonard said.

LeBron James has been awfully quiet all offseason — outside of a few Taco Tuesday posts on social media. LeBron is so accustomed to playing through June that this was the first offseason where he had a full five months off in more than a decade. And all this waiting has King James extremely anxious.

“I’m very motivated. Right now I’m not in a talking-about-it mode. I’ve been very quiet this summer for a reason,” LeBron said. “My mother always taught me don’t talk about it be about it. That’s where I’m at. As a team and myself, we need to get the Lakers back to where they’ve been accustomed to.”

LeBron appears rested and ready to go, and he now has a super sidekick in All-Star forward Anthony Davis.

The LeBron-AD combo became a reality after the Lakers traded away one-third of their roster. But the Lakers brass feel it was a necessary move because now they feel like they have their best 1-2 punch since Shaq and Kobe.

OneManFastBreak predicts the eight teams that’ll make the playoffs in the Western Conference:

1-L.A. Clippers (58-24) – The Clippers would be a lot higher if it wasn’t for Paul George’s offseason surgery on both his shoulders. The timetable PG’s return is around November. Also, the Clippers are planning to implement the same load management approach the Toronto coaching staff did with Kawhi. It won’t matter much if Kawhi or PG take a few games off. These Clippers are the deepest team in the league. Center Montrezl Harrell brings effort and energy every single night, and combo guard Lou Williams is arguably the best closer in the game. Doc Rivers’ crew will be there in April, May and potentially June.

2-Denver Nuggets (56-26) – Nikola Jokic is now universally recognized as the best center in the NBA. The big man from Serbia is redefining the center position with his ability to score, rebound and pass. Jokic is the anchor of a Nuggets squad that is deep and talented. Point guard Jamal Murray gained some much needed playoff experience last year and ready to become the team’s closer. If Michael Porter Jr., 21, ever gets out of the training room and onto the court, the Nuggets could be battling for the top spot in the West for the next few years.

3-L.A. Lakers (54-28) – The Lakers have five championship-caliber players on the roster: LeBron, AD, Danny Green, Avery Bradley and Kyle Kuzma. To win a title, you need at least seven to eight solid guys in the rotation. For now, the Lakers don’t have that. Rajon Rondo, Kentavious Caldwell-Pope and Dwight Howard are extremely limited, and so is JaVale McGee. You can’t trust them in a seven-game series. As long as Davis and LeBron are healthy, the Lakers have a formidable squad. But if one or both miss time, the Lakers are back to being a lottery team. Bringing back Rondo was a mistake. It hinders the progress of Alex Caruso and Quinn Cook.

4-Houston Rockets (53-29) – It is now or never for coach Mike D’Antoni. D’Antoni has his best roster since his Phoenix Suns days, and some could argue it could be better. James Harden is at the height of his powers and there are no signs of him slowing down. In fact, he seems to be getting better and better. The acquisition of Russell Westbrook was panned by critics. Not sure why. Westbrook is a former MVP who is hungry for a title. He and Harden are good friends off the court, and they played together in Oklahoma City. Great players figure out a way to co-exist on the court. Harden and Westbrook will figure out a way to make it work in Houston.

5-Portland Trail Blazers (50-32) – If you still don’t think Damian Lillard and C.J. McCollum are two of the best guards in the league then you should pull up YouTube videos from the 2019 playoffs. Lillard sent the Thunder home with a dagger 3-pointer from Beaverton, while McCollum was at times the best player on the court during the Blazers-Nuggets series that was an instant classic. The loss of center Jusuf Nurkic was masked with the addition of Hassan Whiteside. If Whiteside can provide rebounds and defense, Lillard and McCollum will take care of the rest.

6-Utah Jazz (49-33) – Donovan Mitchell has been teasing us for the past couple of years with his star potential. It’s time for Mitchell to finally make that big leap and become the true alpha dog. Mitchell has a better supporting cast this season with the acquisition of point guard Mike Conley and sharp-shooting forward Bojan Bogdanovic (the taller Bogdanovic).

7-San Antonio Spurs (48-34) – The Spurs have made the playoffs for 22 straight seasons under Gregg Popovich, and that streak will continue this season. Popovich may have pulled off his best coaching job last year. Pop integrated DeMar DeRozan into the Spurs system and had him play the Manu Ginobili role. LaMarcus Aldridge is doing his best fulfilling the Tim Duncan role. Now, Pop’s next challenge is to develop a point guard to play the Tony Parker role. He’s got a couple of willing students in Derrick White and Dejonte Murray.

8-Golden State Warriors (46-36) – It’s strange seeing the Warriors this low in the postseason seedings, but that’s the harsh reality brought about by the departure of Kevin Durant, the injury to Klay Thompson, the loss of Andre Iguodala and the retirement of Shaun Livingston. The biggest challenge for coach Steve Kerr and his coaching staff will be managing the minutes for Steph Curry and Draymond Green. Will Kerr burn out Curry and Green just to earn a seventh or eighth seed? That’s a tough call for a proud franchise.