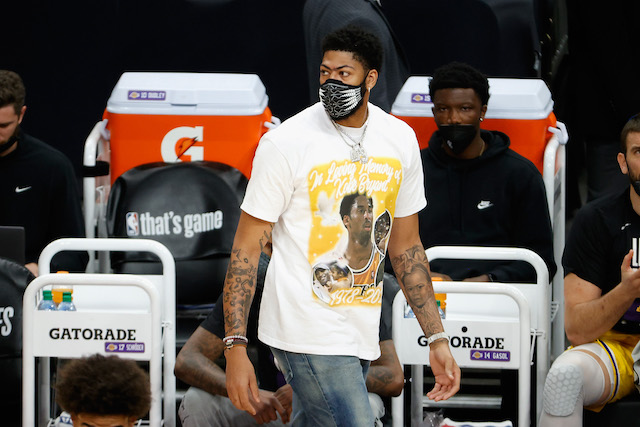 When Anthony Davis limped off the court with 6:35 left in the first quarter of Game 6 in the L.A.-Phoenix playoff series, the Lakers’ reign as NBA champions came to an end.

Without Davis, the Lakers were unable to generate enough offense to keep up with the Suns and eventually ran out of gas. It was the quickest postseason exit by a defending NBA champ since 2015 when the San Antonio Spurs were eliminated by the L.A. Clippers in the first round. The Lakers’ elimination means the NBA Finals won’t have LeBron James for only the second time in a decade and there’s going to be a new champion crowned.

The Brooklyn Nets are now the overwhelming favorites to win the 2021 NBA championship as their odds are currently listed at +170, according to Sports Betting Dime. The Utah Jazz, the top-seeded team in the Western Conference, has the next-best odds at +320. Brooklyn has one of the most potent offenses in the league — averaging 118.6 points per game — and any one of its superstars, whether it’s Kyrie Irving, Kevin Durant, James Harden, is more than capable of dropping 50 points in a game.

It was an incredibly taxing season for the Lakers as they had less than months to prepare after a long stint in the Orlando bubble. The 2020 NBA Finals ended in October and the 2021 season started in late December, giving the Lakers and the Miami Heat — the two finalists in the bubble — just 71 days to recover in the middle of a global pandemic. It’s the shortest offseason in league history.

“From the moment we entered the bubble to today it’s been draining. Mentally, spiritually, emotionally draining,” James told reporters after the Lakers were eliminated in the first round.

“Every team has to deal with it, obviously, but with us and Miami going long-haul in the bubble and coming back on short notice, it’s been very draining,” James added.

Three of the last four teams in the bubble are out of the 2021 playoffs. The Lakers fell in six games, the Boston Celtics lost to the Nets in five games, and the Heat was swept by the Bucks. Denver was the lone team that made a deep run in the bubble to escape the first round, but the Nuggets lost point guard Jamal Murray to an ACL injury for the rest of the season.

The quick turnaround was compounded by a myriad of injuries to L.A.’s two superstars. The injury-prone Davis played in 36 of the 72-game schedule, missing a month due to a calf injury. LeBron also missed 27 games because of a sprained ankle, which clearly bothered him in the playoffs. The Lakers were 21-7 when Davis and James were both healthy. After Davis injured his calf on Feb. 14 against Denver, the Lakers began sliding down the standings and fell all the way down to the seventh seed at the end of the regular season.

“I think health played a big part in the position we were in,” Davis said. “Me missing 30 games, Bron missing an extensive amount of games; we just weren’t healthy. We were very healthy last year, it just wasn’t the same this year. And we couldn’t have our full product on the floor.”

When Davis was on the court, the Lakers led the Phoenix series 2-1. Davis dominated the Suns in games 2 and 3 (both Laker wins), and L.A. appeared headed for the second round. But Davis hurt his groin in the first half of Game 4 and couldn’t finish the game. He missed Game 5 (a Suns blowout) and tried to give it a go in Game 6 but lasted just five minutes.

AD went back to the locker room after going down. pic.twitter.com/Z3POnG4Qws

“The one thing that bothers me more than anything is we never got an opportunity to see our full team,” James said. “We could never fully get into a rhythm, we could never see the full potential of what we were capable of.”

After the Lakers signed center Andre Drummond in March following a buyout by the Cleveland Cavaliers, L.A. thought it added the final piece to another championship contender. But the vaunted lineup of Drummond, Davis, James, Kentavious Caldwell-Pope, and Dennis Schroder was on the court for just six games, including the playoffs. They didn’t have enough time to gain chemistry.

The Lakers enter the offseason with a ton of uncertainty. Davis, LeBron, Kyle Kuzma, Caldwell-Pope, and Marc Gasol are the only players under contract for the 2021-22 season. The team’s big free-agent acquisitions (Schroder, Drummond, Montrezl Harrell) are all unrestricted free agents and are likely not going to take less money to stay in L.A. Cap space will also be a problem. The Lakers are already near the $109 million salary cap and won’t have much flexibility when the free agency period begins.

Schroder had an eventful season with the Lakers. He turned down an $84-million contract extension, but didn’t quite improve his stock. He averaged 15.4 points during the regular season, which was three points below what he averaged in Oklahoma City, and struggled in the Phoenix series on both ends of the court. He averaged 14.3 points, shot 40 percent from the field, got lit up by Devin Booker in the series clincher, and drew the ire of Lakers legend Magic Johnson.

A lot was expected of Schroder, a finalist for Sixth Man of the Year before he signed with the Lakers. But he far from the only disappointment.

Harrell, the player who beat out Schroder for the 2020 Sixth Man award, had a season he’d like to forget. Harrell couldn’t find a consistent role during the regular season, and his playing time took an even greater hit when the Lakers acquired Drummond. Drummond was immediately inserted as the starter at center, pushing Gasol and Harrell deeper in head coach Frank Vogel’s rotation.

Vogel struggled to find continuity with his three centers, and Harrell suffered the most in the playoffs as he was reduced to 39 minutes in the Phoenix series. Harrell could exercise his player option and come back for another season, but the relationship may be permanently damaged.