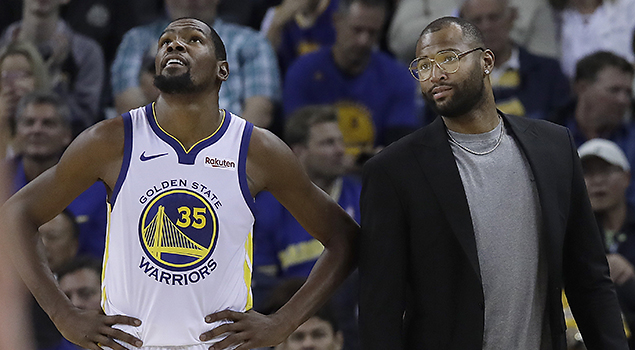 Things are looking up for Kevin Durant and the Warriors after acquiring DeMarcus Cousins. (AP)

When DeMarcus Cousins couldn’t get a call from NBA teams during the free agency period, he picked up the phone himself, called the Golden State Warriors and offered his services for below market value.

The Cousins signing nearly shut down the internet, as the basketball community threw up their arms in disgust and basically surrendered the upcoming season to the defending NBA champs. The rich got richer. The Warriors are favorites, according to online experts, to three-peat and capture their fourth championship in five years.

Here’s the obvious fact. The Warriors are historically great. They were great before Cousins joined them, and they will be great whenever Cousins becomes available on the court. The Dubs don’t need Cousins to win a third straight championship. It would be like giving Amazon founder Jeff Bezos a $1 billion to add to his $147 billion fortune.

And here’s another fact. Cousins will not be the same player following surgery on his Achilles tendon. Few, if any, NBA stars have bounced back from an Achilles tear and return to All-Star form. The injury caused many, like Isiah Thomas and Patrick Ewing, to retire. Kobe Bryant was never the same player after he tore his Achilles. Dominique Wilkins came the closest to getting back to All-Star form, but even ‘Nique had to alter his game. He became strictly a jump shooter.

Cousins can still be an effective role player for the Warriors. But he won’t be the Boogie Cousins who averaged 25 points and 12 rebounds over his last three healthy seasons. We should drop the Boogie out of Cousins. He’ll just be plain old DeMarcus.

OneManFastBreak.net predicts the eight teams that’ll make the playoffs in the West for the 2018-19 season.

1-Golden State Warriors – Just checking to see if Steph Curry, Klay Thompson, Kevin Durant, and Draymond Green are still on the roster. OK, check. Then there’s nothing much to say here except, “good luck to the rest of the league.” The Dubs will cruise to the best record without breaking a sweat. Wake me up in the spring when the playoffs start. Prediction: 58-24

2-Oklahoma City Thunder – Oklahoma City is still basking in the glory of re-signing Paul George. Once the smoke clears from the PG13 free agency celebration, the Thunder will realize they’re still one piece away from being able to knock off the Dubs. OKC didn’t address its most glaring weakness: shooting. General manager Sam Presti needs to deal one of his wing players for a pure shooter who can space the floor and give Russell Westbrook and George more driving lanes. The addition of point guard Dennis Schroder allows Westbrook to slide over to shooting guard — his more natural position. Prediction: 55-29

3-Denver Nuggets – After finishing ninth in 2018, the Nuggets are in position to kick the door open and bust through the playoffs. Coach Mike Malone’s system is perfectly suited for center Nikola Jokic, who one of the most unique players in the league. The Nuggets have a deep roster with a good mix of young and old talent. Point guard Jamal Murray is ready for a breakout season and Paul Millsap adds a veteran presence on and off the court. Prediction: 54-28

4-Los Angeles Lakers – Some “experts” are saying the Lakers are going to miss the playoffs. Those “experts” should have their media badges revoked. How can you leave out the Lakers when the franchise added LeBron James to go along with a boatload of talented young studs ready to have breakout seasons? LeBron is good for at least 15-plus wins on top of what the Lakers got a year ago. There will be some growing pains, but ultimately this new version of Showtime will be very good and may be a year away from becoming title contenders. Prediction: 51-31

5-Houston Rockets – The Rockets came within one game of advancing to the NBA Finals, pushing Golden State to seven games in the conference finals. But instead of adding pieces to a championship-caliber team, the Rockets did the opposite. They failed to re-sign Trevor Ariza, a veteran 3-and-D player with championship pedigree, and added Carmelo Anthony, an aging star whom they would later drop like a laundry bag. Prediction: 50-32

6-Utah Jazz – It turns that losing Gordon Hayward to the Boston Celtics wasn’t such a bad thing after all. Hayward is a good player, but not a great one. The Jazz may have found that great one in Donovan Mitchell. The second-year guard exploded onto the scene, finishing second in the Rookie of the Year race and leading Utah to the second round of the playoffs. Mitchell has become the single face of a franchise that’s used to having dynamic duos. Prediction: 48-34

7-New Orleans Pelicans – Anthony Davis’ game surged when Cousins went down with a season-ending injury. The Brow was among the league leaders in points (28.1), rebounds (11.1) and blocks (2.6), and he ramped up his game during the postseason that pushed the Pels to the second round. The acquisition of Nikola Mirotic paid immediate dividends as he blended well with Davis as a stretch-4. Guard Jrue Holiday is starting to gain national attention, especially on defense after he did a number on Damian Lillard in Pels-Blazers playoff series. Prediction: 47-35

8-Portland Trail Blazers – Damian Lillard and C.J. McCollum are so good they can probably take three YMCA guys to the NBA playoffs. Lillard made his first All-NBA First Team last season and was even in the discussion for MVP. A disappointing first-round playoff exit at the hands of the New Orleans Pelicans was a reality check for the Blazers They were exposed by a bigger, more athletic team. Blazers may be running in place, built more for the regular season. Prediction: 46-36