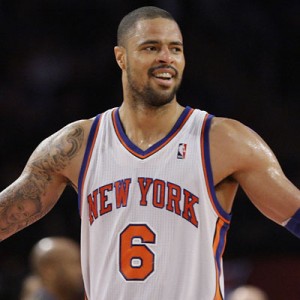 Tyson Chandler changed the culture in New York with his defense. (ASSOCIATED PRESS)

New York Knicks center Tyson Chandler was recently named the 2012 NBA Defensive Player of the Year, breaking Dwight Howard’s three-year stranglehold on the award. Chandler helped improve the Knicks defense significantly and was a big reason why the team earned a playoff berth despite numerous injuries. So why in the world was Chandler on the second team of the all-defensive teams? Much like the do-nothing Congress, the NBA coaches and media couldn’t agree on who belongs on the list of top defenders.

The coaches had LeBron James, Serge Ibaka, Dwight Howard, Chris Paul and Tony Allen on the first team. Chandler was included in the second team, along with Kevin Garnett, Rajon Rondo, Luol Deng and Kobe Bryant. James and Ibaka deserve to be on the first team, but Howard should have swapped places with Chandler. And why is Kobe even on the second team? He’s not even the best defender on his own team.

To settle the debate, OneManFastBreak rates the 10 best defenders during the lockout-shortened 2011-12 season:

10) DWIGHT HOWARD — The Magic center had an up-and-down season on the off the court. He was caught in messy situation with Orlando management with the whole free agency threat, and then he was embroiled in a bizarre incident with head coach Stan Van Gundy. Despite all those distractions, Howard still managed to average a league-best 14.5 rebounds and second-best 2.2 blocked shots.

8) SHAWN MARION — Mavericks owner Mark Cuban thinks The Matrix belongs in the conversation with guys like LeBron James, Kobe Bryant and Tony Allen in terms of perimeter defense. “There’s nobody who’s better defensively outside the center position than Shawn Marion,” Cuban said. The Dallas owner may be on to something because how many players can guard premier power forwards and point guards? “Marion is the only guy who comes to mind,” said Mavs coach Rick Carlisle.

8) KEVIN GARNETT — The Big Ticket somehow has discovered the Hot Tub Time Machine this season, leading Boston team to a No. 4 seeding in the Eastern Conference playoffs on the strength of his leadership and defense. KG will go down in NBA history as one of its best defenders. He’s just one of a handful of players who can defend all five positions. When you look up energy and effort in the program, you see a picture of Garnett’s face.

7) TONY ALLEN — The former Celtic and current member of the Memphis Grizzlies earned his reputation as one of the toughest perimeter defenders in the league during the NBA Finals when he went toe-to-toe with Lakers star Kobe Bryant. Allen gets up in your face and doesn’t allow much air space between him and his opponent. He’s also one of the best help defenders in the league, and among the league leaders in steals. Allen can lock down on shooting guards and point guards, and occasionally small forwards.

6) LUOL DENG — The Chicago Bulls owned the best defense in the NBA and a big reason for it was Deng. Coach Tom Thibodeau says the Bulls are able to do what they do on the defensive end because of Deng’s versatility. “Lu can guard small forwards, power forwards, shooting guards,” said Thibodeau. Deng got snubbed last season when he wasn’t even included in the first or second teams. Anyone who still ignores Deng’s defense is looking more and more foolish each season.

5) ANDRE IGUODALA — The Philadelphia 76ers were one of the best teams in terms of field-goal percentage, and a big reason why was Iguodala. The longtime Sixer was seventh in the NBA in steals (1.7) and only Kevin Durant (8.0) and LeBron James (7.9) had a better rebounding average among small forwards. Despite those numbers, Iguodala remains underrated as a top-flight defender because the Sixers are not on national TV each week. But Iggy Hops have convinced the experts after finishing seventh in the Defensive Player of the Year voting. 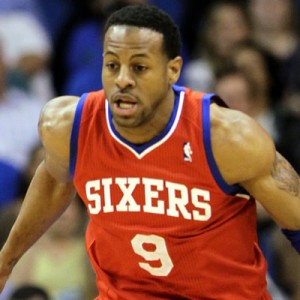 4) RAJON RONDO — Rondo is pound for pound the toughest guy in the league. The man came back to a basketball game after dislocating his elbow. Most guys in the league would have been halfway to the hospital if that happened to them. The Celtics remain one of the hardest teams to score on because they have a great backline defender in Garnett and an absolute pest in the frontline in Rondo. He is always among the league leaders in steals, and no point guard in the Association rebounds better than Rondo.

3) LEBRON JAMES — Miami Heat coach Erik Spoelstra marvels at how LeBron can cover so much ground on the defensive end it almost looks like there are five LeBrons out there. The Heat employ a help defense principle, which dates back to Pat Riley’s days as a Lakers coach. James has turned into the linchpin of the Heat D with his ability to guard every position on the court and, when Spoelstra needs to cool off a hot scorer, he usually calls on James to be the shutdown defender.

2) TYSON CHANDLER — Where would the New York Knicks be without Chandler? Right near the bottom of the league in defense like they’ve been in years past. It was amazing what Chandler did in his first season in Gotham. Not only did he contribute offensively with his league-leading 67% field goal percentage but he changed the culture of the Knicks by quarterbacking the defense from his center position. New York went from being the 22nd-ranked defense to fifth best in 2012.

1) SERGE IBAKA — Serge Ibaka earned the moniker Serge “Iblocka” for his penchant for sending away shots near the rim. The Oklahoma City Thunder power forward had a mind-bloggling 241 blocks (3.7 average) during the regular season which led the NBA by a mile. The next guy was L.A. Clippers center DeAndre Jordan who had a 135. 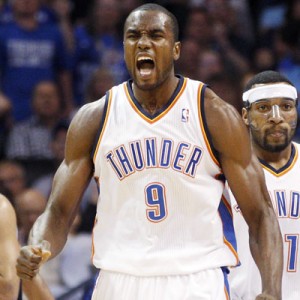 This is just Ibaka’s third season as a professional so the sky — or his case, the rim — is the limit for the man from Brazzaville, Congo. Ibaka finished second to Chandler in the DPOY voting with 294 votes to Chandler’s 311. But you have to wonder if Ibaka was playing in New York and Chandler was in Oklahoma City those votes would be flipped around.