Through the first 29 games last season, the Boston Celtics were on a phenomenal 27-2 run and seemed poised to challenge the 1996 Chicago Bulls’ record of 72-10 mark. But something happened to the Celtics’ bullet train that derailed their championship aspirations and date with history.

On Dec. 25, 2008, the Celtics lost to the Lakers 92-83 and that’s when the wheels started to lose some air. Cedric Maxwell said that last year’s Celtics started so fast they were gunning for 70 wins, which pushed the team into exhaustion and began to wear down. 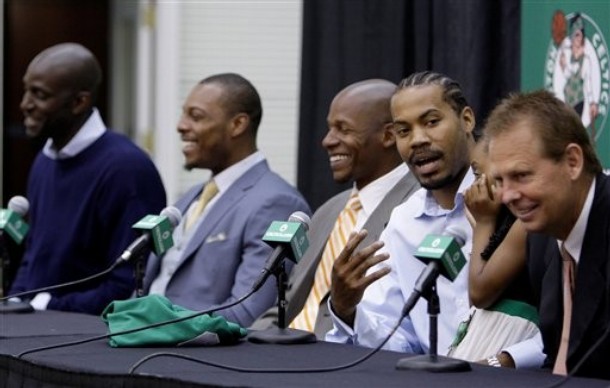 Then an injury to All-Everything forward Kevin Garnett forced the Celtics to play the postseason without their emotional leader and anchor on defense. The BIG THREE was reduced to THE BIG TWO. The result: A seven-game war with the Chicago Bulls, which they eventually won but not without a price. The Celtics were so drained, particularly Paul Pierce and Ray Allen, by the first-round series that fatigue became a huge factor in the next series, losing to Orlando in seven games.

Getting eliminated by the Magic in the Eastern Conference semifinals was a sign that the Celtics needed to add another important piece to their roster.

Wallace enters his 15th NBA season, not exactly the fresh legs the Celtics were hoping for but what he brings to the table is a championship pedigree and some much-needed frontcourt help in case Garnett slips and falls again. Wallace is a top-notch post defense despite his advanced age, and he is a threat to score from anywhere on the court. His ability to hit the 3-ball will open up the court for Pierce and point guard Rajon Rondo, who became an absolute star during the playoffs. If anything, Wallace’s post defense will allow KG to become a free safety.

“He’s so versatile, the way he shoots the ball, his IQ, and he’s going to give Kevin [Garnett] a break and we’re not going to rush him along too much. He looks like the Rasheed of old,” Pierce said of Wallace.

“We’re very focused,” Pierce continued. “You could see this is a very serious group from Day 1 in training camp. We’re out here like somebody stole something from us. You can see it in everybody’s eyes. Everybody came back in great shape and ready to go.”

With the addition of Wallace, the Celtics can field a dynamite five in Garnett, Allen, Pierce and Rondo to finish games. Kendrick Perkins will end up starting at center, but expect Wallace to be the closer when it matters.