Basketball is king in the state of Indiana and Reggie Miller is the undisputed prince of the Pacers.

Very few basketball studs play their entire careers with one team, and Miller was blessed to play his entire 18-year NBA career with the Indiana Pacers. He was the 11th overall pick in the 1987 draft, but the selection was greeted with some pessimism because Pacers fans wanted Indiana schoolboy legend and Indiana University All-American Steve Alford. But it didn’t take long before Miller, who grew up in Riverside, Calif., and attended UCLA, won over the hearts of Indiana fanatics.

Miller is one of the 12 newest members of the Naismith Basketball Hall of Fame and to honor his induction into basketball royalty in 2012, OneManFastbreak.net ranks his five greatest moments:

Even though he was approaching the twilight of his career, Miller proved he could still raise his game in the biggest of stages during the 2002 NBA playoffs. The No. 8-seeded Pacers stretched the top-seeded Nets to five games in the first round, and Miller was at his absolute best in Game 5. He sent the game into overtime with an improbable turnaround bank shot from behind the 3-point line and sent the game into a second overtime with a driving dunk (and Miller rarely drove to the basket) past Kerry Kittles. The Nets eventually won the game and advanced to the NBA Finals, but Miller carved out another special playoff performance.

4-PUSHES JORDAN, BULLS TO THE LIMIT 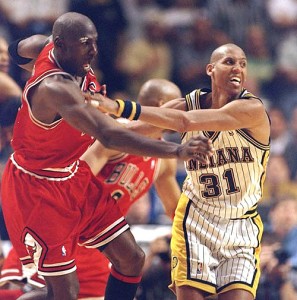 Reggie Miller gets away with a shove on Michael Jordan in the 1998 Eastern Conference playoffs.

Reggie made 2,500 threes throughout his illustrious career, but none bigger than the one he hit in Game 4 of the 1998 playoffs against Michael Jordan and the Chicago Bulls. The play began with Miller running Ron Harper through a screen. Once he got free at the top of the key he saw Jordan and brushed him off with an obvious shove. Miller admitted it was an offensive foul, and he was just as surprised a foul wasn’t called. That non-call greatly benefited the Pacers as Miller got a clean look and buried a clutch game-winning 3-pointer. The Pacers extended the Bulls to the fullest, only to lose in seven games. However, Jordan certainly got a little dose of his own medicine in the hard-fought series.

The highest scoring game of Miller’s NBA career occurred on Nov. 28, 1982, when he dropped 57 points on the Charlotte Hornets to set the Pacers’ all-time franchise record. Reggie put on a show at Charlotte Coliseum, abusing Hornets guard Dell Curry for most of the night. Pacers announcer described the scoring spree as a volcanic eruption. Miller exploded for 23 points in the third quarter and knocked down 21 consecutive free throws for the game. 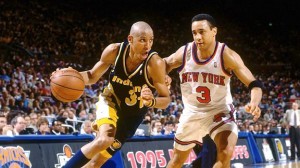 Miller enjoyed playing in New York’s Madison Square Garden and absolutely loved tormenting the Knicks. His stunning performance in Game 1 Eastern Conference semifinals in which he scored eight points in 8.9 seconds only heightened New York’s genuine disdain for him. After hitting a three with 13 seconds left to cut the N.Y. Lead to three, the Knicks had trouble inbounding the ball and the ball found Miller in the corner after getting away with shoving Greg Anthony to the ground. Miller stepped back and buried another three to tie the game. The Knicks had a chance to regain the lead but John Starks, Miller’s nemesis, missed two free throws and then Patrick Ewing missed a contested 12-footer in the paint. After grabbing the rebound, Miller was fouled and knocked down two free throws to complete an improbable Pacers comeback.

Miller described Indiana’s Game 5 win against the Knicks in the 1994 East finals a watershed moment for the Pacers franchise. The Knicks were considered the bullies of the East and heir to the throne vacated by the Chicago Bulls when Michael Jordan retired. The Knicks-Pacers series was a classic major-market team versus small-market squad. Miller had had enough of Pat Riley, Patrick Ewing, and the rest of Knicks, who had eliminated the Pacers in the previous two seasons. So Miller took it upon himself to lift an entire franchise with one incredible quarter. He scored 25 points in the fourth, knocking down three after three right in the face of his nemesis John Starks and Hubert Davis. Miller, who finished with 39 points, was feeling so good he got into a running smack-talk with longtime Knicks fan Spike Lee, who was sitting courtside. The chatter turned into a huge spectacle when Miller kept staring down Lee with each cold-blooded 3-point shot. And when Miller swished a trey from near midcourt he looked at Lee’s direction, with his arms cocked back, and uttered a few expletives (if you can read lips he said “Shut the f*** up, b***h!”) while grabbing his throat to signify the choke sign. Lee claims Miller also grabbed something else besides his throat but it wasn’t caught on video. Even though the Pacers lost the series, the game turned into one the most memorable moments in NBA playoff history and it catapulted Miller from being Cheryl Miller’s younger brother to a bonafide superstar and one of basketball greatest villains.