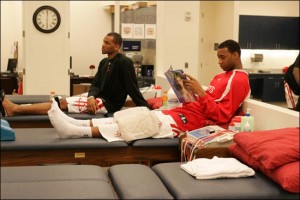 Tracy McGrady's knees have been so problematic he was forced to sit out the playoffs.

The Houston Rockets finally figured out a way to get out of the first round – don’t play Tracy McGrady. The harsh reality of the situation is McGrady was holding back the Rockets and probably the best thing that could have happened was T-Mac getting hurt and sitting out the NBA playoffs.

For whatever reason, McGrady has never been able to get his teams past the first round. But the moment he puts on a suit and posts a DNP on the box score, the Rockets find themselves in the Western Conference semifinals for the first time since 1997. Coincidence? Not likely.

For all his wonderful individual accomplishments, T-Mac is a reluctant superstar. He just does not have a closer’s mentality. He would rather pass up a shot than take it himself. When things get rough and tough, McGrady grows soft, which does not translate well to his teammates who are all looking to their All-Star guard to deliver daggers instead of wet pampers.

He is also prone to injury, logging more minutes on the trainer’s table than on the court, which makes him more of a She-Mac than a T-Mac in the eyes of most observers. Perception sometimes becomes reality, and T-Mac has never been able to shed his cream puff image. Like a nasty computer virus, T-Mac’s sagging attitude has infected the rest of the team, particularly center Yao Ming. Yao’s confidence comes and goes, and some blame T-Mac for bringing down his 7-foot-6 center.

The Rockets may not be a better team talent-wise without McGrady, but they are certainly playing better without their much-maligned superstar and have a better shot in the second round with the tandem of Yao Ming and Ron Artest leading the way.

Sure, Artest tends pound the ball too much and take ill-advised shots, but what Artest brings to the table is a certain swagger and toughness the Rockets have been lacking in more than 10 years.

And Yao seems to truly enjoy playing with his new BFF.

At the postgame press conference following the victory in Game 6 against Portland, Yao and Artest were laughing and joking with reporters. Artest was in such a great mood he went into the stands. (No! Not again, right?)  This time, Artest exchanged celebratory handshakes with the fans.

“It’s not the first time I’ve been in the stands,” Artest joked. “This guy offered me a (drink), so I went in there and sat down with him.” Then, when Artest stood up and left the podium, Yao spoke into the microphone and told Artest, “I’ll see you in the club.”

How times have changed in Houston. The dark cloud that had been hovering over the franchise for years is finally lifted, and Yao and Artest are smiling from ear to ear and are going clubbing.