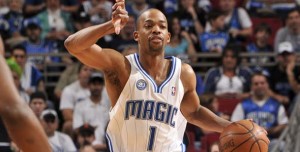 The Orlando Magic finally won a game in the NBA Finals after failing six times and, at least for one night, made NBA followers believe that they have a shot against the Los Angeles Lakers in this series.

When you break down Game 3, the Magic won, 108-104, not because Dwight Howard, Rashard Lewis or Hedo Turkoglu played lights out, or even because Kobe Bryant showed his vulnerable side. The Magic broke into the win column mainly because of the man they call Skip to My Lou.

When you check the box score, you see that Howard and Lewis each scored 21 points and Turkoglu hit his playoff average with 18 points. As you go down the list you notice Rafer Alston had 20 points. Bingo! That was the difference.

“I was aggressive from start to finish,” Alston said. “I was able to mix it up. That’s what I do best instead of just standing on the 3-point line. That’s what you guys saw in me the first two games, standing on the 3-point line, as if I was Ray Allen or somebody. Tonight I was able to penetrate, get to the foul line, shoot the pull-up jumper, shoot the three, find open men.”

As Rafer Alston, the Magic point guard has struggled with his shot and found himself competing with Jameer Nelson for minutes in Game 1 and Game 2 – both Laker victories.

As New York City streetball legend Skip to My Lou, who showed up in Game 3, the Magic point guard played 36 minutes, made eight of his 12 shots, swished his only 3-point attempt and his push-the-pill-up-the-court approach was the biggest reason why Orlando shot 75% in the first half and 62% for the game.

“Skip did a good job of attacking and allowing guys to get open for free shots. We have to do that against a team like the Lakers. Make them move and try to get easier shots,” said Howard, who easily played his best game of the series with 21 points, 14 rebounds and sank 11 of his 16 free throws.

Notice that Howard referred to him as Skip and not Rafer.

Howard knows that when Alston is skipping with the ball and plays as Skip to My Lou, his game turns into an And 1 Mix Tape and his swag permeates through the rest of his teammates.

“Skip to My Lou got us started early in that first quarter,” Lewis said of his starting point guard, who gave Orlando another scoring threat besides Howard, Lewis and Turkoglu.

“We played with more speed, more energy on the offensive end,” Alston said. “A lot of pick and roll, which is our game, and find Dwight. The bad thing is we shot 62 and a half percent and almost lost the game. We gotta find a way to defend these guys, stop fouling Kobe on 3-point shots and pull-up jumpers.”

Magic coach Stan Van Gundy took a lot of heat for playing Nelson too much in Game 1, which many observers say disrupted his team’s flow. But Alston said there was never a moment where he was upset with Van Gundy for his point guard rotation.

“He told us he was looking for somebody that maybe get out there find a rhythm, maybe stick some shots,” Alston said of his coach. “First two games, myself and Jameer were struggling to do so. Stan and I have a great relationship. He understands that he’s just trying to coach to win games; I’m trying to play and help him win games and help this team. Never once took it personal.

“In the first game, I just said it was a rhythm thing and never had that done before, never played like that. Second game, I was able to find a flow but not hit shots. Tonight I was able to make shots,” added Alston, who was 3-for-17 from the field and had just 10 points in the first two games of the Finals.

“The guard play was great. Rafer got off to a good start and played very, very well; played with great confidence,” Van Gundy said. “We still turned the ball over too much, but the guard play was clearly much, much better.”

And the reason for Alston’s turnaround?

“You have good games and bad games. Rafer has bounced back well in the playoffs before. He’s had some great games in the playoffs and he’s had some other games that weren’t as good. That’s just sort of the way it goes. I don’t think there’s any big psychological mystery to the whole thing,” Van Gundy said. “The one thing that you can’t question with our team is our resilience. I thought we held our composure pretty well.”

Speaking of composure, when the ever-honest Van Gundy was asked again about the motivational push that got Alston going in Game 3, he sarcastically replied: “I’m a motivational genius. That’s what I am. I thought for two days about what to say to him and I said, ‘Play your game.’ Took me two days to come up with that.”

If Alston keeps “playing his game,” the Magic might actually push this series back to Los Angeles. “This league is a make or miss league,” he said. “First two games, I’m missing and I look horrible. Tonight, I’m making and I look good.”

“When the ball goes in, those look like really good shots,” the Magic coach said. “And when they don’t go in, you say ‘Wow, they’re not getting any good shots. When the ball is going in 62 percent of the time, those are great shots.”