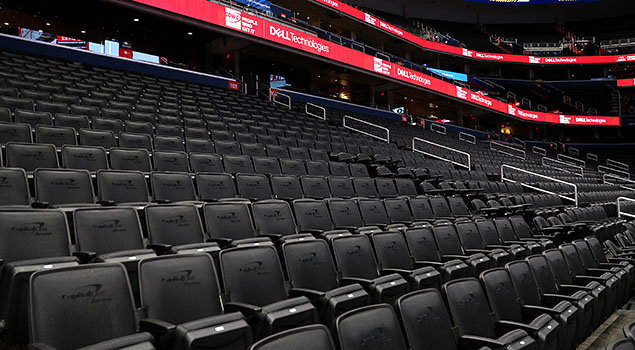 Seats are empty prior to the Knicks playing the Wizards at Capital One Arena. (Getty Images)

The wake-up call came on March 11. That’s when the NBA made the unprecedented move of suspending the season due to concerns over the coronavirus pandemic.

NBA commissioner Adam Silver said the league had been in talks for days on how to work out the logistics of playing in empty arenas. But when Utah Jazz center Rudy Gobert tested positive for COVID-19, Silver had to act swiftly and decisively. He decided to put the season on pause.

“The NBA will use this hiatus to determine next steps for moving forward in regard to the coronavirus pandemic,” the league announced.

Hours after the NBA halted business, the rest of the sports world followed. The NHL paused its season and MLB delayed the start of its 2020 regular season. The MLS also suspended its season and the NCAA gave a whole new meaning to March Madness after it canceled the men’s and women’s basketball tournaments, marking the first time college basketball won’t have a champion.

Silver was asked if there’s a chance the rest of the NBA season might be canceled. He said there’s an outside chance it could be, but it is too early to make that call.

“I just don’t know more at this point,” Silver said on TNT’s “Inside The NBA.” “There’s another factor that may go to the seasonality of this virus. Talk to a lot of experts and some have a theory, just as a common flu, as the weather changes, we may see it peter out a little bit. Again, we don’t know. At this point, we are just waiting.”

And so we wait.

President Trump and the coronavirus task force that includes leading infectious disease expert Dr. Anthony Fauci established federal social distancing guidelines to combat the pandemic. Those guidelines call for Americans to work from home and avoid social situations, as well as unnecessary travel. Trump said the guidelines will remain in place through the end of April, which means the NBA season won’t be restarting any time soon.

Fauci has become somewhat of a cult hero amid the health crisis. Golden State Warriors All-Star guard Steph Curry even had Fauci educate his millions of followers on Instagram about the coronavirus and the Q&A reached 50,000 concurrent viewers. Warriors coach Steve Kerr was among those who watched the Q&A – which also caught the attention of former President Barack Obama – and he said Curry represented the organization extremely well. “Steph is incredible and I’m so glad he interviewed Fauci,” Kerr said.

By the way, Fauci is no stranger to basketball. He played for Regis High School in Manhattan, so Dr. J isn’t the only one who can operate on the court.

Dallas Mavericks owner Mark Cuban told CNBC that he expects the NBA will resume play before fans are allowed back in arenas due to COVID-19 concerns.

“We have to be very cautious, particularly as we try to come back,” Cuban said. “I think at first though we’ll play a lot of games without fans and then figure it out as some of the available medicines … become available, we’ll go from there.”

Cuban added: “The NBA is going to try to come back as early as we can without spectators, just on TV and streaming, and just give people something to celebrate.”

Cuban garnered widespread praise for expressing intent to support hourly Mavericks employees impacted by the postponing of games, and attention for his own reaction to the news.

Even if the NBA restarts the season in May, it will alter the league calendar significantly and we could see The Finals stretched through August. But Cuban told ESPN’s Rachel Nichols that having the NBA season in the summer might make the most sense.

“The only reason we haven’t played games past June 12 in the past is because our TV partners. As you guys know, households using television in the summer drops significantly. Well, the TV landscape has changed dramatically over the past three years, four years, and so those numbers and those equations have all changed significantly,” Cuban said. “But because there’s not a lot of competition — there’s only regular season baseball — I don’t think necessarily until August, but I can easily see us playing the last seven to 10 games of the regular season to get everybody back on course, and then going right into the playoffs going into July, if not August.”

Cuban is one of the strongest voices on the league’s board of governors. He won’t just be dropping radically ideas without the benefit of some hard intel.

The NBA has been a step ahead the rest of the sports world during this historic health crisis. Whenever Silver decides it is safe to resume games, you can expect others to follow.