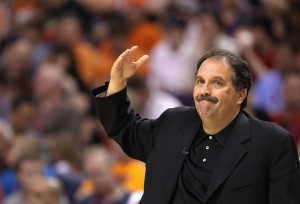 Orlando Magic head coach Stan Van Gundy is always must-see TV whenever he’s given a microphone and surrounded by reporters.

After the Magic defeated the Hawks in Game 5 to close to within 3-2 in their playoff series, Van Gundy was in prime form during his postgame press conference. You could tell Van Gundy has reached his boiling when it comes to the abuse his All-Star center Dwight Howard has taken this season for leading the league in technical fouls.

It’s no huge surprise Van Gundy is on Howard’s corner. That’s a given. It was his explanation, or comparison, that sounded a bit like someone has become thin skinned whenever the issue of hard fouls and resulting technical fouls on Howard are brought up.

“The game plan is to get me frustrated, and I don’t think people understand what I go through,” Howard said on Tuesday night after being held to eight points in 29 minutes. “But I just keep it in my head that it’s bigger than whoever is checking me or just trying to foul me.”

Based on that last quote, you can tell the hard fouls are clearly affecting Howard and Van Gundy came to the aid of his center with this gem aimed at the media: “You guys in the media who want to be critical of him, go run on the treadmill for 40 minutes and every two or three minutes I’m gonna hit you as hard as I can up side the head, OK. And I what I want you to do is to keep running and don’t react at all. Don’t say anything to me, don’t look at me, don’t hit me back, don’t do anything.”

With the fear of facing a fine from the league office, Van Gundy made sure his comments were not taken as an attack on NBA referees, even though it was still a jab at the officials.

“Look, if you’re a referee they have their guidelines. They just think it’s hard fouls and that’s fine. I’m not criticizing the referees here. What I’m saying is people in the media who criticize Dwight for the few times that he retaliates, understand that that’s what you are criticizing.”

Van Gundy continued, “I want to make it clear. I’m not criticizing the officials. And I’m not. I’m criticizing you guys, OK. And I don’t think I can be fined for that because nobody likes you guys.”

Getting whacked in the head every three minutes while running on a treadmill is definitely not part of the brochure at World Gym, but Van Gundy makes a very honest but accurate assessment. Fouling a guy is one thing, but beating on his head as he goes up for a dunk is a no-no.

If you follow the letter of the NBA law, it’s a flagrant foul every time. If Howard, or any player for that matter, gets smacked on the head while going up for a shot, it should be called as a flagrant foul.