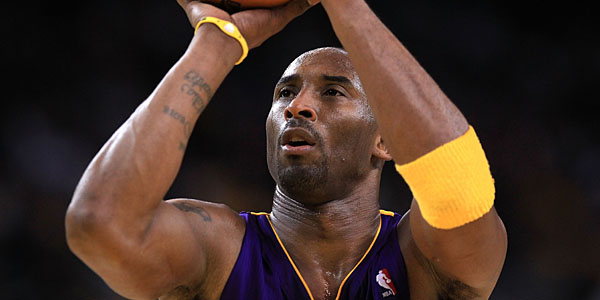 Kobe Bryant is doing all he can to help the Lakers land the eighth spot in the Western Conference to earn a playoff berth. (GETTY IMAGES)

Kobe Bryant accomplished a rare feat at his age last night in the Lakers’ 113-106 win over the Portland Trail Blazers.

According to Elias Sports, Bryant’s 47 points, five assists, and three steals made him the third player (since steals became an official statistic in 1973-74) to go for 45-plus points, five-plus assists and three-plus steals at the age of 34 or older. The other two players to accomplish that feat? Larry Bird (March 15, 1992) and Michael Jordan (Dec. 31, 2001).

Kobe guaranteed that the Lakers would make the playoffs and it looks like he is definitely doing whatever he can to make that come true. He also had four blocks, and made 14 of his 27 shots from the field (51.8%).

His 47 points set a record in Portland, eclipsing the previous best of 44 by LeBron James in 2011.

“That’s what you try to do is you try to do whatever you can,” Bryant told the Los Angeles Times of his all-around effort. “You don’t look for excuses, you don’t wait for anybody else to make rotations, you do it yourself and by doing it, it sets an example for everybody else to do the same thing.”

I’ve been watching Kobe since he was acquired by the Lakers on a 1996 draft day trade with Charlotte. He continues to amaze me with his game. I am a diehard Lakers fan, but just when I think I’ve seen it all, he does something truly special.