There are certain images that are deeply embedded in the history of the NBA. There’s the famous photo of Red Auerbach smoking a cigar on the sidelines in the Boston Garden as the Celtics are about to win the championship. The great decade of the 1980s was defined by the picture of Magic Johnson and Larry Bird fighting for position under the basket. Michael Jordan’s game-winning shot in Game 6 of the 1998 NBA Finals not only captured Jordan’s greatest moment but it also displayed the priceless reaction of the Utah fans as the Bulls inch closer to their sixth NBA title. And then there’s the NBA logo. Although the league won’t confirm it, the image clearly mirrors a young Jerry West driving to the hoop.

As good as those images were nothing compares to the iconic photograph of Wilt Chamberlain sitting on a bench and holding up a white piece of paper with the number “100” etched on it the night he set the NBA’s unassailable single-game scoring record on March 2, 1962 in Hershey, Pa. 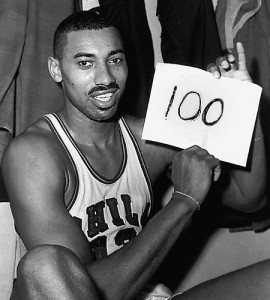 Wilt Chamberlain's 100-point game against the New York Knicks in 1962 is one of the greatest records in sports history. (ASSOCIATED PRESS/PAUL VATHIS)

The photo was taken by Paul Vathis of The Associated Press. The man who concocted the whole idea was longtime NBA statistician Harvey Pollock. In the TV special “Wilt 100” that aired on NBA TV to celebrate the 50th anniversary of Chamberlain’s record-setting night, Pollock recalled when Wilt sat on a stool inside the Warriors’ dressing room while Vathis waited to get his shot. Pollock – who remains employed by the Philadelphia 76ers – asked the photographer, “Did you take your pictures yet? He said, ‘I don’t know what to take. What can I do?’ ”

Pollack thought for a second and then went over to Philadelphia Bulletin writer Jim Heffernan.

“Harvey asked me ‘Do you have any paper, Hef?’ “I gave him a piece of copy paper where you wrote your story on,” said Heffernan.

Pollock scribbled “100” on the clean sheet of paper and handed it to Chamberlain. “Do you see this sign?” Pollock asked Wilt. “That indicates what you did here tonight, and a photographer is going to take a picture of you. [Wilt] said, ‘Hey, great idea!’ ”

“It’s just Wilt sitting on this bench kind of sheepishly looking at a camera holding up a piece of paper. But it works,” said Gary Pomerantz, author of the book “Wilt, 1962.” “It’s as great as any image that’s ever been taken in basketball. Whether is Julius Erving’s dunks, or Michael Jordan levitating, or the sky hook by Kareem, that image trumps them all.”