Orlando Magic head coach Stan Van Gundy is always very candid when it comes to evaluating his team, and that includes himself.

The Magic seemed like it couldn’t do anything wrong after the first two round of the 2010 NBA playoffs. After three games in the Eastern Conference finals, the Magic can’t seem to do anything right. The Magic is on the verge of getting swept out of the playoffs after dropping Game 3, 94-71, in Boston.

The Celtics are now ahead 3-0 in the series, and no team in NBA history has ever recovered from an 0-3 hole.

“The most disappointing to me was I didn’t have our team ready to play. That’s the most disappointing,” Van Gundy told reporters after Game 3. “I’m the coach of this team, and it starts with me. I’m not happy with where I had my team tonight. I thought we were a step late on everything. They just riddled us. Again, I’ll take the blame on that too. 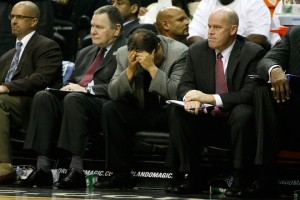 Stan Van Gundy can't bear to watch what is happening to his team. (NBAE/GETTY IMAGES)

With their backs flushed against the wall, Van Gundy said the knee-jerk reaction is to pack it up and retreat. But it’s hard for him to fathom a team that has been so mentally tough all season long will go down without a fight.

“What I said to them after the game is there are a lot of guys in that room who have worked long and hard to bring this franchise up a long way,” Van Gundy said. “That game out there tonight, not just the score but the way it went, is disappointing because that’s not who we are. So, how do we pick it up? I mean, I think between right now and Monday night there’s gonna have to be a lot of soul searching and a lot of pulling together.

“The easiest thing to do for anybody when things go badly is to escape. That’s all we want to do. It’s going to be everybody’s natural reaction. I’m not saying our guys will do that. That’s everybody’s natural inclination. It takes very mature, very mentally tough people to stand up and say, ‘No, I’m part of this and we’re gonna pull together.’ ”

Magic center Dwight Howard had another horrendous game and was held to seven points on 3-for-10 shooting and had just seven rebounds in Game 3.

“Right now, we gotta find ourselves,” said Howard. “Seem like tonight our bodies was here but our minds wasn’t. Our hearts seem like it wasn’t into it, I don’t know.”