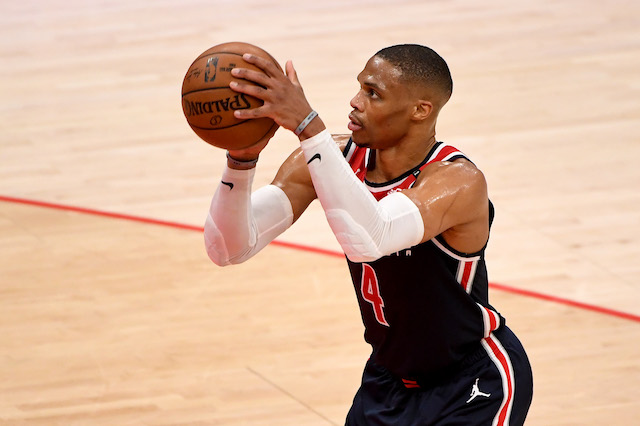 Before Russell Westbrook came along, Oscar Robertson’s 181 career triple-doubles seemed unattainable. Even Magic Johnson and Jason Kidd both said no one will ever break The Big O’s record. But someone forgot to tell that to Westbrook.

Washington Wizards guard Russell Westbrook made history on May 10, 2021, when he produced the 182nd triple-double of his career in just 940 games. Robertson’s 181 triple-double record stood for 47 years, and many thought it was going to stand the test of time much like Wilt Chamberlain’s 100-point game. Westbrook finished with 28 points, 13 rebounds, 21 assists in a 125-124 loss to the Atlanta Hawks at State Farm Arena in Atlanta. Westbrook had an opportunity to cap his historic night with a game-winning shot, but his 3-pointer with under three seconds left grazed the rim and bounced off to the side.

The loss takes some of the zest off Westbrook’s record-setting performance, but it doesn’t take away what the 32-year-old former UCLA standout has accomplished throughout his basketball journey. He won an MVP in 2017 after posting the first triple-double season in league history since Robertson did it in 1962. Westbrook has averaged a triple-double in four of the last five years, and he will lead the league in assists for the third time. Not bad for a natural shooting guard who learned how to play point guard when he got to the NBA.

“What he’s done and how he’s done it, he didn’t just inch his way to it, he exploded the chart. And not only did he explode it, he said, ‘If you don’t think that was good let me come back and do it again the next year,’ ” two-time NBA champion and current NBA TV analyst Isiah Thomas said.

Teammates respect Russell Westbrook. You’ll never hear any of his current or former teammates say anything bad about him (expect maybe Kevin Durant, but that’s a whole different topic). Opponents respect him. Fans love him. The only people who pour water on his greatness are the basketball TV, radio, online pundits who are into advanced statistics. They don’t like the turnovers and the awful shooting. Those are legit claims. But from a pure basketball standout, Brodie brings it every single night. He has never cheated the game. He plays every game like it’s gonna be his last. You have to respect that.

“It was always a misconception of Russ on how he is as a teammate, how he is as a person, how he responds to coaches. Total opposite,” Wizards shooting guard Bradley Beal said on ESPN’s “First Take.” “He’s all about the team, he’s all about winning, he’s all about getting better. And he’s all about pulling his teammates up, trying to get the best out of everybody. That’s something that has helped me. Seeing his mentality, his approach to the game night in and night out. He’s an MVP. He’s a first-ballot Hall of Famer.”

You can argue that a player could be labeled as “selfish” for chasing scoring titles instead of NBA titles, but there is no case or argument to be made when it comes to assists. An assist is a coach’s favorite statistic. It means the ball doesn’t stick and a player’s action ultimately led to a teammate scoring a basket. When Magic and John Stockton and Steve Nash led the league in assists, they were celebrated. They were labeled unselfish, making others better. When Russ Westbrook leads the league in assists, it is seen as padding stats.

Westbrook has been relentlessly pursuing the triple-double record for the past few years now, and some in the media suggested he was padding his stats. Russ’ response to the whole “stat-padding” claim was simple. “People that’s talking or saying whatever they need to say, they should try doing it and see how hard it is,” he said. And he’s right. If grabbing 20 rebounds or dishing out 20 assists were so easy, then why don’t we see it more. LeBron James ranks second in triple-doubles among active NBA players and he’s nowhere near Westbrook.

Westbrook checks a lot of boxes. The only box that’s unchecked is a championship. He came close in 2012 when his OKC Thunder squad with James Harden and Durant reached the NBA Finals, but lost to LeBron and the Miami Heat in five games. But not having a championship ring shouldn’t take away what Westbrook has done in a career that has been doubted from the start.

“Can’t take anything away from him,” said Wizards coach Scott Brooks, who coached Westbrook in Oklahoma City for seven seasons before reuniting with him in D.C. following an offseason trade.

“He’s a winner,” Brooks said. “[He’s] making the basketball and the non-basketball world a better place. Not a lot of guys have had the impact that he’s had, both on and off the court. It’s pretty phenomenal.”

Brodie wasn’t highly recruited out of high school and when he arrived at UCLA he had to earn his way to the starting lineup. He proved the doubters wrong with two Final Four appearances and shot up the NBA draft boards following impressive workouts. He landed as the fourth overall pick in the draft by Seattle — which later moved to Oklahoma City. Westbrook, Durant, Harden turned OKC into a Western Conference powerhouse before Harden left for Houston and KD left for Golden State. Westbrook single-handedly kept the Thunder relevant for three seasons before being traded to Houston in 2019, teaming up with Harden once again. The Harden-Westbrook duo could only get the Rockets to the second round of the 2020 playoffs in the Orlando bubble.

There were whispers of Brodie being “done” after a slow start to his Wizards season. He was obviously hurt, but he didn’t complain. Once he finally got healthy, the old Westbrook returned. Washington was left for dead during the halfway point of the season and was practically slotted in the lottery before the season turned around dramatically. Now, Brodie and Beal have the Wizards competing for a spot in the play-in series.

“They came from way out of it to where they’re in the thick of this thing. It’s mind-blowing,” Sam Mitchell said.