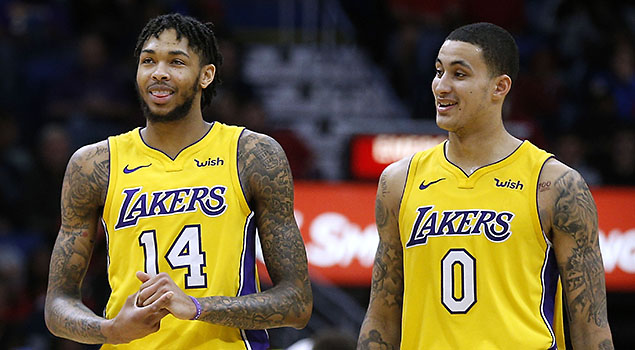 When ESPN released its annual statistical model projecting win totals for the upcoming NBA season, the Los Angeles Lakers were left out of the playoff picture.

That had many basketball experts scratching their heads because the Lakers enjoyed the best offseason of any NBA team this summer, landing the most coveted free agent on the market. But the acquisition of four-time MVP LeBron James wasn’t enough for ESPN to put the Lakers in the 2019 playoffs. Instead, it projects the 16-time NBA world champs to finish ninth in the ultra-competitive Western Conference with 41 wins. That win total seems way too low for a team that finished 35-47 last season, and could have easily topped 41 wins if not for a rash of injuries to some key players. Second-year forward Brandon Ingram missed 23 games last season and rookie point guard Lonzo Ball, the second overall pick in the 2017 draft, missed 30 games.

According to this site, the teams most likely to go up against one another in the Finals are the Golden State Warriors and the Boston Celtics. The same site has the Lakers among the favorites to reach the Finals, which means there is a very good chance L.A. will win more than 41 games in the 2018-19 season, and 5o-plus wins is not completely out of reach.

The Lakers were already trending up prior to the addition of LeBron. Ingram, 20, was coming into his own as a scorer while Ball, 20, was part of an impressive draft class that included NBA All-Rookie first-team selection Kyle Kuzma, 23, and Josh Hart, 23.

Ingram made an incredible leap from year one to year two. After a pedestrian rookie season, the 6-9 forward with the length and game that has been compared to Warriors star Kevin Durant bumped up his points-per-game average from 9.4. to 16.1. He also pushed his field goal percentage from 40 percent to 47 percent. You could just see Ingram’s confidence growing by the minute, so much so that the Lakers’ coaching staff often put the ball in his hands during crunch time.

Ball’s rookie season was cut short by an assortment of injuries. But before he was shut down for the season, the former UCLA standout was having a solid campaign. His breakout game came in his second game as a pro as he scored 29 points to go along with 11 rebounds and nine assists in a 132–130 overtime win at Phoenix. He became the youngest player in NBA history to complete a triple-double when he had 19 points, 13 assists and 12 rebounds against the Milwaukee Bucks before he turned 20. Philadelphia’s Markelle Fultz would later break that record when he pulled off a triple-double at 19 years old and 317 days.

Ball’s shooting woes — along with the constant drama surrounding his father, LaVar Ball — overshadowed what was actually a very solid first year. His final stats (10.2 points, 6.9 rebounds, 7.2 assists) were comparable to Jason Kidd‘s when he won Rookie of the Year in 1994-95. But because Ball shot just 36 percent from the field and 30 percent from behind the 3-point line, many overlooked the beauty of his overall game.

Kuzma was the steal of the 2017 draft as the 27th overall pick out of Utah exploded onto the scene like a Falcon 9 rocket.

Kuzma can score from anywhere on the court. He has an array of shots that stretches all the way back to the 3-point line. He finished the season averaging 16.1 points and 6.3 rebounds while shooting 45 percent from the field. Those numbers could have been vastly better if he had started more than 37 games.

“Kuzma should have been a lottery pick. Kuz is a problem,” Durant said about the Lakers’ rising star.

Kuzma recently told ESPN that the rest of the league should take notice and ignore some of the noise surrounding the Lakers’ latest veteran acquisitions that seem to suggest that the young core is not ready to take over the program.

“We think that a lot of people are underestimating us. It is definitely going to be fun playing with all these new guys,” Kuzma said. “A lot of people say we got a lot of different people, a lot of new people. But change can be a good thing. It is not necessarily always a bad thing. There’s a lot of teams in the NBA that need to work on their chemistry.”

He added: “I don’t know why people kind of just rule us out because we are young. We are hungry. We are competitive. Anybody that watched us play last year, we were in a lot of games.”

Former Villanova standout Hart came on strong late in the season once he was given increased playing time. He really took off this offseason as he led the Lakers’ summer league squad to the championship game in Las Vegas. He was named the MVP of the NBA summer league in Vegas.

Now, add LeBron to that young core and the Lakers should zoom past last year’s win total.

When Ball, Kuzma, Hart and Ingram were clicking, the Lakers were among the league leaders in points in the paint and points per game (108.1, 11th overall). Only the Rockets and Warriors played at a faster pace. The Lakers were also in the top-15 in defensive efficiency. They were 25th in points allowed, but the addition of LeBron, a former first-team All-Defense, Rajon Rondo and JaVale McGee should fix some of the problems on the defensive end.

The Lakers not only have the roster to compete for a championship they’re also built to beat the Warriors.

Lakers coach Luke Walton has hinted that LeBron may play some center, which could present some big-time problems for the rest of the league. The Lakers could potentially roll out a finishing lineup of Ball, Hart, Ingram, Kuzma and LeBron. All are 6-5 or taller with LeBron anchoring the backline. The Lakers’ version of “small ball” could rival the Warriors’ famed “Hampton Five.”